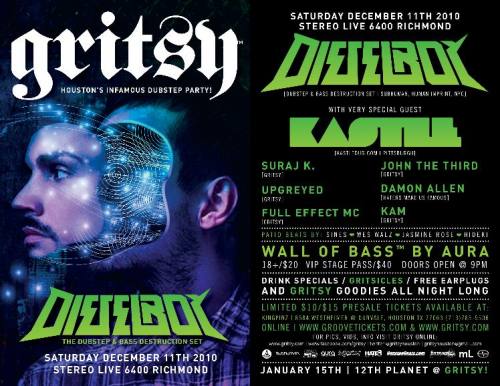 TICKETS WILL BE ON SALE AT THE DOOR STARTING AT 9PM

It’s been quite a 2010 BASS ODYSSEY for Gritsy & for our final stand alone event of the year, we’re going out with a BOOM! Saturday, December 12th, we’re excited to bring you the sounds of the ever so debonair KASTLE and an exclusive “Dubstep & Bass Destruction Set” by the international, drum & bass/underground dance music movement icon DIESELBOY!

GRITSY is a crew of djs/producers/like minded individuals, responsible for first exposing the city of Houston to dubstep in 2006 & producing some of the largest dubstep events in the SOUTH. Gritsy's flagship, self titled event [currenly hosted @ Stereo Live] features a wonderfully enthusiastic crowd, great djs/selectors, AWESOME music and the Aura/Gritsy WALL OF BASS that'll make your body SHAKE, BREATH, & FEEL some serious BASS!

It keeps getting bigger & better, so if you haven't joined Houston's infamous dubstep party and movement or heard about it yet, YOU WILL SOON!

Join the Gritsy group too!