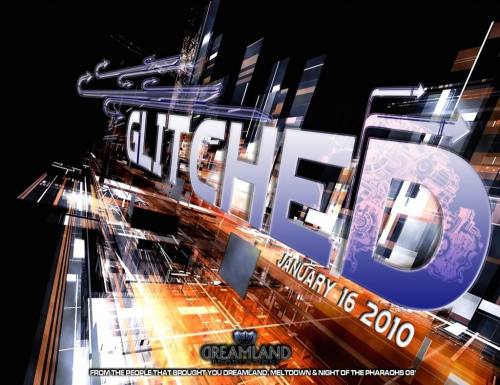 FROM THE PEOPLE THAT BROUGHT YOU: DREAMLAND Series, MELTDOWN, NIGHT of THE PHARAOHS & SCOTT PROJECT DREAMLAND PRODUCTIONS IS PROUD TO ANNOUNCE:
GLITCHED
( A DREAMLAND APPRECIATION PARTY!!)
***HEADLINING***
*HIS FIRST SOLO SALT LAKE CITY, UTAH APPEARENCE*
edIT of The Glitch Mob
Hip Hop / IDM / Melodramatic Popular Song
LOS ANGELES, CALIFORNIA
www.myspace.com/edit
http://www.theglitchmob.com
http://www.alphapuprecords.com
http://www.planet-mu.com
http://www.facebook.com/edITbeats
Edit is most known for his collaborative work with other DJ's and musical artists. He is an old friend of electronic artist Daedelus and has contributed a remix to his Something Bells release.In addition to his friends in The Glitch Mob, edIT has also worked with and produced albums for many popular electronica and hip-hop artists such as Sole, Phoenix Orion, Emanon, Dntel, Boreta, Jel, Busdriver and TTC.
Before he was edIT, indie hip-hop artist Edward Ma began his career in the late '90s as the Con Artist. During his stint as the resident DJ at Konkrete Jungle Los Angeles, Ma worked with Hive, Daddy Kev, James Tai, Busdriver, P.E.A.C.E., and Mikah 9; he also hosted a regular program on Dublab Radio. When not performing, Ma acted as producer and engineer for other musicians such as Sole, the aforementioned Busdriver, Aloe Blacc, Emanon, and Dr. OOP under the Con Artist moniker. The name was retired in 2003 and replaced with edIT while Ma was completing his first solo album.
In 2004, Crying Over Pros for No Reason was released on the Planet-Mu label. Rather than rest on his laurels, Ma continued to explore his craft, creating remixes and mashups that gained him further recognition in the world of electronic music. Fans and fellow DJs weren't the only ones to take notice -- in 2006, Urb magazine named Ma one of their "Next 100" artists to watch. Certified Air Raid Material, the follow-up to Crying Over Pros for No Reason, was released in the autumn of 2007. Outside of his work as edIT, Ma has created ad music and jingles for Face the Music. These compositions have appeared in commercials for Scion, Toyota, Mercedes-Benz, and Calvin Klein, among others. edIT is one artist you do not want to miss. Prepare to be blown away and DANCE like you have never danced before!!
.::ALSO HEADLINING::.
HOBBZ
SALT LAKE CITY, UT
www.myspace.com/DJHobbz
An innovator and master of many soundz, Hobbz always brings it dark and hard. His soundz span the ranges of glitch, dub-step, D&B, breaks, and anything he can use to get the dance floor rockin'. Enhanced by his cutz, mixing, and turntablism... the beatz are guaranteed to be IN YOUR FACE!
VS.
HOBBES
SALT LAKE CITY, UT
Deep, melodic beats that touch your soul is Hobbes game. Specializing in trance, house, garage, breaks, and all of the classic sounds that helped build this scene. His music is sure to make you dance, smile, and just plain FEEL GOOD!
Cat's Den / Substruk Records / Fader Freekz / DarkStar 801 / LunchboxRadio.com / Boro Syndicate
Come see split personalities battle themselves!
DarkStar.LunchboxRadio.com
www.LunchboxRadio.com
www.myspace.com/DarkStarRadio801
Be sure and check out DarkStar 801, Thursday nite from 7-9, for Utah's best locals each and every week.
***LOCAL ALLSTARZ***
NICK BLISS
ROMA
TINK FU
SCOTT EVOL
SON: R
EEVEN
RORY
SHORT BUS & DJ SHREK
***BASS FACTOR***
FEATURING SALT LAKE CITIES VERY OWN::
DJ JULIETTE & DJ ASHTON MAC*
MAJIK TONY VS. DATA BASS
DJ C-CEE
MANY MORE TBA....
TICKETS ON SALE NOW
*MECHANIZED RECORDS* (SALT LAKE CITY)
*UPROCK RECORDS* (SALT LAKE CITY)
*DEJA VU (Ogden New Gate Mall)*
GRINDERS SKATE SHOP ( TOOELE)
THE SPOT (MURRAY, Off of Van Winkle & State st.)
SMOKER'S GURU (West Valley)
**ALL SMITH'S LOCATIONS**
ONLINE @
www.SMITHTIX.COM
www.24TIX.COM
TICKET PRICES:
Buy 1 Get 1 FREEE for Only $20.00 ((LIMITED @ MECHANIZED ONLY))
$15.00 @ All other Retailers*
(Get your tickets early, this show will sell out)
PLENTY OF JUICY INFO TBC.... STAY TUNED
SPECIAL THANKS TO:
*DREAMLAND CONCERT SERIES*
*COME UNITY (EVERY SAT @ CLUB SOUND)*
*SPICE*
UNIFIED CHAOS
BRUSH IT UP (AIRBRUSH CLOTHING)
*IMAGINE ENT.*
*GROOVE NATION*
EXILE - EVOLUTION*
*SOLID UNDA GROUND*
*V2 EVENTS - V2AM*
*MECHANIZED RECORDS*
UPROCK RECORDS
WWW.SMITHTIX.COM
WWW.24TIX.COM