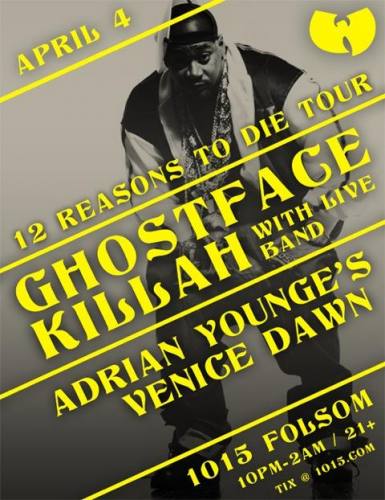 
Wu-Tang's Iron Man sums up his move to Def Jam succinctly: "Same music, different label." For Tony Starks's legions of fans, those four words should bring dope music to their ears-literally. Yep, Ghost is back with his fourth solo LP, The Pretty Toney Album, and ain't nothing changed but the imprint. Nearly three years have passed since 2001's Bulletproof Wallets, and Ghost is anxious to inject his lyrical wizardry back into the rap game. "When you get something real vintage and out of the ordinary, best believe that shit gonna stand out," says the Staten Island native. "That's how I try to keep my music."


A quick check of his resumé makes it clear that Ghostface's music always makes a splash. From his 1996 debut Ironman, to 2000's epic Supreme Clientele, to his last release Wallets, Ghost has more front-to-back classic albums than most rappers have singles. Add his appearances from the Wu-Tang galaxy of hits on songs like "Can It Be All So Simple," and "Ice Cream" and it's no idle boast when Ghost describes himself as "one of the most creative niggas in the game." What sets the Wally Champ apart from other MCs is his inimitable style. "I'll make a n'gga cry in a minute. I'll make you happy. I'll make a bitch wanna fuck you," says Ghost. "Those are my techniques. And that's the advantage I have over a lot of MCs, because a lot of them is stuck so much in one way, once they try to come out of that realm, people might not take them seriously. I'm a universal rapper."


Whether it's heard in the club or in your headphones, The Pretty Toney Album proves that Ghostface's run of instant classic is far from over. "I'm not going nowhere for a minute," says Ghost. "I see myself rhyming until I'm 70... not saying I'm gonna be putting out records and all that, but this is a gift from God." And like a star player traded to a new team, Ghost is ready to show and prove for Def Jam. "I ain't finish balling out yet," he says with a smile. "This is the beginning."