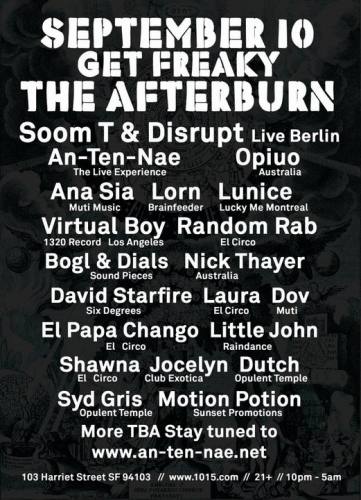 
Get Freaky: The Afterburn


On recording several tracks with Disrupt and fellow label mates Maffi, Soom T discovered a production vibe undoubtedly suited to her progressive vocal output and vowed to dedicate to the new found sound known simply as Digital Laptop Reggae. With a bundle of European shows with Disrupt and several riotous crowd churning sets having left a firm imprint on European audiences, the Jahtari and Soom T marriage looks set to become a union of legendary proportions.

Soom T - Pull it Up / Casio Tempo Riddim by RiddimSurfer


An*ten*nae is one of San Francisco’s most sought after DJs and live performers. After years of production ranging from electronica to breaks to dubstep, he has developed his signature “Acid Crunk” sound, currently dominating the west coast.

Dead Prez Vs. An-ten-nae - It's bigger than Acid Crunk by an-ten-nae


Imagine a precisely blended concoction of tight irresistible grooves, chunk fueled bouncy beats, luscious brooding soundscapes, and a bowl of scrumptious glitch. Welcome to the musical world of Opiuo. A self confessed music addict with a light hearted approach to life and art. Opiuo is at his best whilst hiding from the world, creating fun fueled music. Influences coming from everything, from life changing experiences, to mere cups of tea. Incorporating sounds as varied as jazz, reggae, funk, rock, psychedelia, and down right chunky goodness.