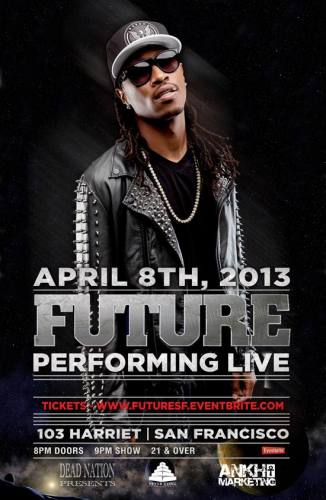 
Due to circumstances beyond our control the FUTURE April 8th, 2013 show at 1015 Folsom has been postponed. FUTURE has been added to Lil Wayne's Tour coming to the Bay Area market in late August and has to push this show date back until after that show. Your tickets will be refunded via eventbrite. Please feel free to contact us with any questions or concerns. Apologies for any inconvenience this may have caused and thank you for your understanding.

VIP Tickets include access to a private mezzanine area

The man born Navyvadius Cash is ready to dominate the charts as the 25 year-old Atlanta native's classic mixtapes have put the streets and clubs in his clutches with his first single "Tony Montana."

"I'm just coming out, but if you go anywhere in the south," says Future, "I get that love and respect like I have a catalog of LPs under my belt. My mixtapes have had a definitive impact which is amazing and humbling at the same time. Now my music is spreading all over the world. I'm ready to deliver universal hits."

With his newly signed record deal courtesy of Epic Records and his connection to Atlanta's famed Dungeon Family, Future's career is finally off the launching pad. His first single's bubbling success comes from a mixture of the hypnotic track, Future's signature melodic flow, unforgettable chorus, and features international superstar Drake.

"When I was making 'Tony Montana,' it was so far fetched for me to get Drake on the record. They called me and said 'Drake wants to get on Tony.' We had a long conversation. I sent it to him and he sent it back the same night. 'Tony Montana' is the 'Scarface' movie on wax," explains Future.

Future's career started to take shape seven years ago when he hooked up with his cousin Rico Wade, trailblazing producer and founder of the pioneering collective of hip-hop legends, The Dungeon Family. "I learned so much from him," Future says of Wade, producer of such seminal acts as OutKast, TLC, and Goodie Mob. "He's so much of a leader. I picked up from his leadership. In order to be a leader, you have to start your own movement."

In late 2010, Future went through a life change and made songs incessantly. "I stayed in the studio everyday," he says. "There are days I went to the studio broke, but I said I'm not going to miss one day in the studio. The day I miss could be the day God decided to bless me. It wasn't easy. By far the hardest thing I had to do in life was change, but it was by far the best move."

Earlier this summer, Future inked a deal with L.A. Reid at Epic Records. The MC says it felt like destiny because Reid had also signed Organized Noize 20 years ago. Future already has his first two projects lined up: an EP this fall and a full length LP early next year.

"My EP is called Watch This and the meaning is basically, 'watch what's about to happen with my career,'" he revealed. "The full album is titled Pluto. Pluto is bridging the gap from where I started to now. I make 'astronaut music.' I make music on the highest level. When you listen to Pluto, you'll understand. I'm outta here! The music is more melodic on the album. It's feel good music straight from the soul. It's music with no boundaries."