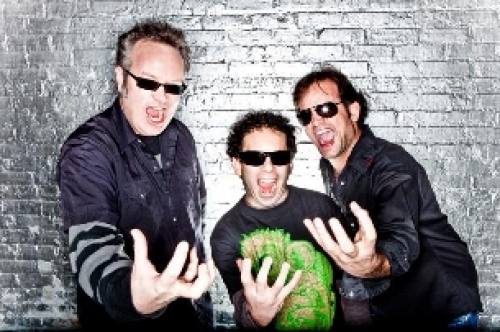 FUTURE ROCK: Mickey Kellerman and Felix Moreno, alongside drummer Darren Heitz, are the driving force behind Future Rock. During their explosive live show, all three mibers wield synthesizers, live loops and samples-Kellerman on the keys, Moreno on the bass, Heitz on drums-to form an amalgamation of excitient, constructed completely live onstage. The Chicago trio has been perfecting its brand of live-instrument dance music since 2004 and-just like Future Rock's pulsating and escalating anthis-their momentum is about to explode. Their live riixes of Black Moth Super Rainbow and Death from Above 1979 are sweeping proof of Future Rock's riarkable riix skills. But that's not all.

Recorded on July 25, 2009 in their hometown of Chicago, Live in Wicker Park captures the raw energy of a performance that packed Milwaukee Avenue, turning rooftops into dance floors and fans into maniacs hanging out of open windows. According to Moreno, the atmosphere and the songs-six of which have never officially been released-are the best representation of Future Rock ever recorded. Live in Wicker Park is a 52 minute wall of sound that'll leave listeners wondering how three people create the rhythmic textures that sei to come from a small army, rather than just a trio. The album saunters in with the airy-house of Understand the Sky and sprints towards hyperspeed down a rabbit hole for Pedal Metal-finding a way to go everywhere in between without losing the band's identity.

Unlike some other electronic bands that also use a foundation of live samples and loops, Future Rock is more concerned with making songs than being progressive sheerly for the sake of it. Melodies trump abstraction and true iotion beats the bizarre. "I'm not a shy bass player, I want you to hear the bass string clank against the fret," Moreno says. "Unlike many electronic musicians, we're not afraid of the major key."

"We're a little strange," Kellerman adds, "we don't fit into any genre."

Kellerman and Moreno met in Chicago during college in the early '00s and soon forged a song-writing partnership. They later met Heitz in downtown, making this trio a truly Windy City affair. Future Rock began their ascent by rocking after-party sets usually reserved for DJ's and soon became the burgeoning festival favorite they are today. Along the way, their LED-heavy light show has become one of the best in the business. Their albums Sugar Coated Bullets (2006) and Gears (2007), alongside unforgettable live performances and crafty riixes, have garnered Future Rock love from Pitchfork, Time Out Chicago, Stereogum, URB, The Daily Herald and more.

In addition to a mind-numbing festival schedule, Future Rock will be completing their first studio album in three years. "We're definitely going into the studio to cut and refine our best, rather than searching for the material," Moreno says. And with a proclamation like that, the title of Future Rock might not be so bold.

Sub Swara creates, constructs, produces and plays genre-bending bass music that parallels the diversity of their home town of Brooklyn, NY. Consisting of Dhruva Ganesan and Dave Sharma, Sub Swara's musical genome brings together a wide assortment of DNA  from dub to hip-hop, dancehall to punk rock, and all the global sounds in between. Meticulously crafted for both dancefloor intensity and cerebral curiosity, Sub Swara's music and live sets bridge the gaps that divide, uniting all tribes. Sub Swara combines electronic production, live instrumentation, and 3000% of recommended energy levels to bring to life an inclusive, human experience that creates an inviting space for anyone and everyone.

Before this current evolution, Sub Swara was originally imagined and executed as a club night of the same name. Founded by Dhruva and original members Haj and Sunder (with Dave coming on board in late 2007 as a natural outgrowth of producing several tracks with Dhruva), the monthly event focused on bringing together bass music of all creeds and cultures, becoming one of the most highly respected and popular club nights in NYC over its 3-year span. Guests included luminaries like Mary Ann Hobbs, The Glitch Mob, The Bug, Bassnectar, Poirier and many others. Sub Swara, together with peer events like Trouble & Bass and Dub War, catalyzed critical new directions in New York electronic music.