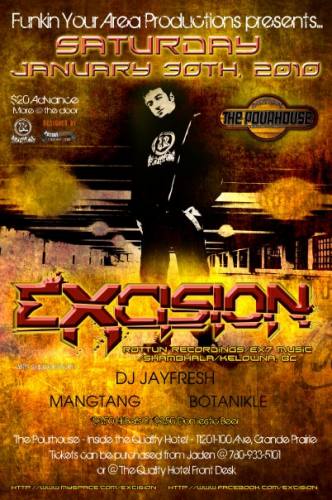 Funkin Your Area Productions presents... EXCISION
Here's a bit of info on this dubstep assassin.
Excision
Rottun Recordings/EX7 Music/Shambhala/Kelowna, BC
www.myspace.com/excision www.facebook.com/excision
Taking influence from DnB, Metal, and Hip Hop, Excision is a Dubstep artist who must be heard to fully believe. Combining the morphing bass lines of Drum and Bass, the aggressive energy of Metal, and the laid back vibes of hip hop, Excision's style is incomparable.
This young Canadian's passion for music has already driven him to become one of the biggest Dubstep acts of North America. Anyone who has heard a set by this bad boy has walked away feeling energized and refreshed. If you’re lucky enough to catch a DJ set, expect an assault of bass heavy tracks, mixed quickly and seamlessly.
Having done remixes for Pendulum, Noisia, Wu Tang, Freestylers, Ctrl Z, Apex and the mighty label Lifted, it has become apparent that there is a large demand for the dark side of Dubstep. Look out for more of Excision on his labels Rottun Recordings & EX7 Music, and collaborations with Bassnectar, Pendulum, Datsik, Downlink and many more. Fresh off of an Australian, New Zealand, UK, and North American tour, watch out for Excision in another U.S. & Canada tour in early 2010, as well as Excision in the UK, Europe, Australia, and New Zealand.
with support from
DJ JayFresh
Funk, Breaks, Electro, Fidget, Dubstep, DnB, Glitch Hop
(Funkin Your Area Productions)
Mangtang
Dubstep, Electro
(Eargasm Music Productions)
Botanikle
Glitch Hop, Breaks
(Eargasm Music Productions)
This is going to be the heaviest show to hit Grande Prairie!
This event is at the Pourhouse (inside the Quality Hotel)
Tickets are $20 in advance, more @ the door!
Tickets can be purchased from:
Jaden @ 780-933-5101
Darren @ 780-933-4319
or @ the Front Desk of the Quality Hotel
We will be bringing in more sound and lights!
$3.50 HiBalls and $3.50 Domestic Beer All Night Long
18+ with ID