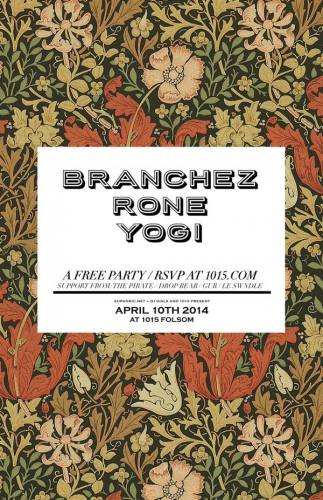 
FREE WITH RSVP FOR THE FIRST 500 PEOPLE


*entry valid with a print at home ticket ONLY*


The rise of a true producer can be a rarity in an age where the pool of talent is over flooded, but NYC native Branchez has emerged as a favorite amongst our staff and fans. With a keen understanding of production detail and the ability to create some iconic remixes (check out his Rihanna “Stay” Bootleg & What So Not “High Are You” Remix), Branchez broke out amongst a very talent class in 2013. He ended his year with a mix being featured on Diplo & Friends showcasing why he is set to continue growing in 2014. Clever bass tracks meet a dash of R&B and trap heaters throughout the entire hour, making for one mix you won’t just listen to once.


Despite the many years still ahead of him, Rone (otherwise known as Erwan Castex) has already come a long way, being one of the most acclaimed young French musicians (he’s just turned 32) on the electronic scene. After passing his Baccalauréat, Erwan was not too sure what he wanted to do for the rest of his life and took up film studies at university. He looks back fondly on this most formative period but, when not in lectures, he would assiduously cultivate his prime passion: music. After obtaining his MA, he started working on film shoots in various roles (including assistant director, production coordinator and set decorator) while continuing to make music in his spare time. And then one day – InFiné – spotted some of his tracks on the web (Bora in particular, which was featured on Agoria’s At The Controls mix) and got in touch with him. From then on, things went very fast: he released his debut EP (2008), performed his first live show at the Rex Club and released his first critically-acclaimed album, Spanish Breakfast, in 2009. Rone’s career had just taken off.


Three years have passed since the release of Spanish Breakfast and now his next album, Tohu-Bohu, is coming out for Fall 2012 via Infiné – a label that clearly knows the meaning of the word supportive. Tohu- Bohu (hurly-burly) is an unexpected, even startling title, coming from an artist whose music is in no way shambolic or garish. He explains : “Over the past three years, I have met a lot of people and also been on my own a lot; I have lost myself and found myself again, working frantically; three years of doubt but enthusiasm too. During that time, I have learnt to structure the mess inside me.“Tohu Bohu” is a representation of my own chaos, which I have harnessed, worked my way through and committed to record.” And above all, over these past three years – which saw Rone play live in the most prestigious venues and festivals (from Panorama Bar to Sonar, not forgetting Dour festival) – two major events occurred: the young man turned thirty and, after growing up and taking his first musical steps in Paris, moved to Berlin in March 2011. He feels very much at home in Berlin, a city he can’t stop raving about, far from the non-stop party clichés. “It isn’t really because of the music that I moved here, it had more to do with being fed up with Paris. I stayed in Berlin for a month in June 2009 and had the best time ever. I fell in love with the atmosphere straight away: an amazing peacefulness, which you can’t fail to appreciate when you come from Paris... And sure, I was able to sample the Berlin nightlife at various parties, but what really appealed to me was the city’s distinctive laid-back attitude. In fact I fell for that combination of serenity during the day and effervescence at night.”


On the musical front, although Tohu-Bohu is on the whole decidedly ethereal and much more dream- than rave-inducing, it isn’t merely a record to be played at home, in the secure confines of a lounge or bedroom. Filled with lascivious languor and gradually built-up crescendos, it slowly but surely induces a trance-like state, and there is no doubt as to the potential of some tracks (Fugu Kiss and Parade in particular) to make a serious impression – as the evening gets going or in the first light of dawn – on non-conformist dancefloors worldwide, Berlin included.