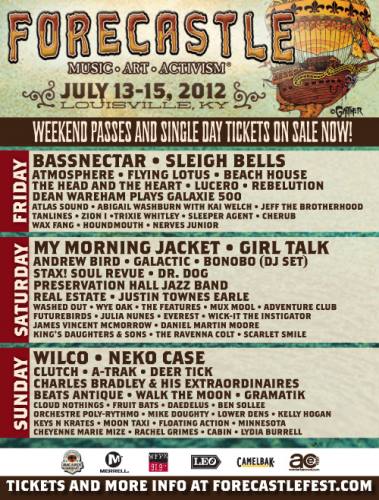 The Head and the Heart

Additional artists, as well as art installations, environmental and sustainability activities, outdoor extreme sports park, festival partners, culinary options and other activities will be announced in the coming weeks. Details for the separately ticketed, late night after parties, including those on the historical Belle of Louisville steamboat, will also be forthcoming. A full breakdown of artists by day can be found at forecastlefest.com.

Tickets will also be available at select retailers throughout the region including: WHY Louisville in Louisville; Shake-It Records in Cincinnati; CD Central in Lexington; Indy CD and Vinyl in Indianapolis; and Grimey’s New & Preloved Music in Nashville.

Founded in 2002 by Capt. JK McKnight and an ambitious deck crew of young volunteers, The Forecastle Festival has grown from a small community gathering into a major national festival, attracting 30,000 travelers annually. The event has received numerous accolades, like being named one of the "Top 101 Things to do in America" by SPIN Magazine and “Top 15 Outdoor Festivals in the Country” by Outside Magazine, but it's more than that.

In a sea of change, the Forecastle Festival is a port-of-call where the world gathers to experience the best in Music, Art, and Activism®. A celebration of sights, sounds, and sustainability, Forecastle connects travelers North, South, East, and West. Merging entertainment with education, Forecastle inspires a voyage of personal growth and global change.

As Wayne Coyne of the Flaming Lips said after his 2010 performance, “I hope Forecastle lasts 100 years. We’ll play as many as we can.”