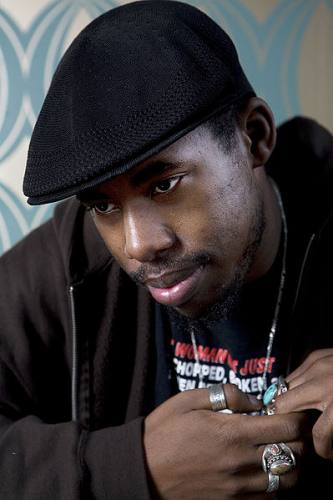 Its impossible to understate what Flying Lotus has created with Cosmogramma, since there is so much to unpack: The effortless musical cohesion of the historical avant-garde and the next chapter of futurism. The conversation at the post-hip-hop crossroads of two urban music traditions, American and British, and at the center of one of the most vibrant sound scenes on the globe today: the beat-and-bass-heavy corner of Los Angeles (of which FlyLos Brainfeeder is a mainstay). The uncommonly natural musical communication between the physical world and the spiritual, one made personal and given a cohesive form.  Even the funny smells, without the slightest whiff of self-importance.

Many artists strive for something grand and vast, but 26 year-old Steven Ellison actually brought it forth from his head and heart. To not dress it in the garb of the special does it a great disservice.

It would have been so easy to just make a dubstep album, says Ellison, a nod to the scene that has, since the 2008 release of his Warp debut, Los Angeles, lionized him as one of its progressive champions. (Take a listen to the bass communiqus spun each week on Mary Anne Hobbs BBC radio show to get a good sense of just how much pull Flying Lotus soulful sound has in that world.) Instead, he made Cosmogramma, a far-reaching kaleidoscope of sonic emotion, which Ellison calls my most honest work, just true to what I wanted to say. Not to say that dubstep headz wont find themselves drooling all over it; just that it goes much deeper than that.

No longer simply an outgrowth of Ellisons machines, the music here is also the product of live instrumentalists from the worlds that Cosmogramma engages.  Theres the constant bass presence of Stephen Thundercat Bruner, a cornerstone of Sa-Ra Creative Partners and the Young Jazz Giants; theres Rebekah Raffs harp connecting the dots between the music of Harry Partch and Ghostface Killah (both of which shes performed); theres an appearance by the tenor sax of Stevens cousin and jazz royalty, Ravi Coltrane, and by the voice of one Thom Yorke, an Oxford bloke taking respite from singing in the most influential rock band of the 21st century. There are also contributions from hip-hop string players, and Nintendo-influenced Austrian keyboardists -- presumably just so that Flying Lotus would not have to invent them.

Because inventing himself from disparate parts was already work plenty.

When I was younger, I didnt really appreciate [their presence] as much, Steven says. This is my grandma and my aunt -- thats just how they work. But as I started developing my own thing and (getting) into the jazz thing, it was like, wow! They never pressured me to make music. They were just super supportive of my creative endeavors, whatever they might be. They didnt really get what I was doing, even my aunt. She didnt really follow [hip-hop], but she knew deep down that I was meant to make music. There is, in other words, a deeper reason why a reprise of FlyLos tribute to Coltrane, Aunties Harp (or, more specifically, a chunk of Raffs remix), appears on Cosmogramma.

One other set of experiences contributed to Stevens creativity since his youngest days: a continued exploration of lucid dreams and the spiritual plane.

I must have been 16, 17 when I first had an out of body experience, he says. I woke up and I was floating, swimming around the room, looking back at myself. Ever since then, its been on! Ive tried not to push [my beliefs] on the listener, but [these experiences] have played a part in my music. Its very inspiring stuff. You try to unravel the mysteries of the universe in the music. (The Cosmogram that contributes to the new albums title is in fact, a figure of this world, created for meditational purposes and often signifying the wholeness of the universe. Mandalas are good examples of cosmograms.)

Stevens initial creative pursuits were in film and he followed that love to San Franciscos Academy of Art. There, an encounter with a fellow student, the artist who remains known only as Dr. Strangeloop, changed his perspective. At the time, I wasnt familiar with making music on computers, and he was doing that, as well as being a film-maker. He showed me how to do it, and that was it. After that, I started cutting classes to make beats. (Dr. Strangeloop remains a primary audio-visual member of Brainfeeder.)

Ellison returned to a Los Angeles scene beginning to simmer with ingenuity. The sound there mixed underground hip-hop and soul, a jazz-like prerogative on improvisation and exploration, leaning towards progressive bass and electronic rhythms, and embracing a modern West Coast psychedelic mindset. It loosely united folks around shows at Little Temple (on Hollywoods east side), the Dublab collective, and the futuristic fusions being cooked up on the labels Plug Research (who released Flying Lotus first track, Two Bottom Blues, on its The Sound of LA comp, and later his debut album, 1983) and Stones Throw (where Ellison was an intern).

By the end of 2006, these disparate groups had their own clubhouse, the now-famous Low End Theory weekly at The Airliner. They were also fostering an atmosphere that not only helped give name to FlyLos 2008 album, but, four years later, is one of the globes musical hotbeds.

LA is cool, says Ellison. Its a nice little vibe here, supportive, very family-oriented, very inviting. When I grew up in the Valley, no one was doing any of the stuff I was doing, there was no guidance, no peers. [Whereas], the 18 year-old kid who cant drink at Low End Theory, but is asking us how to do stuff, thats the kid I am looking out for now. All the scenes blend [at LET], which is another cool thing about it. Its not really bound by race or gender or a sound. If you play low, bass-y stuff, it goes off, no matter how fast or slow -- electro, drumnbass, hip-hop, dubstep, house, it dont matter.

Its an attitude thats had global connotations too.

I love the fact that now there are kids and musicians coming over from London to Low End Theory, and they are doing their biggest show ever there. And vice versa. When I first started, no one really cared. Now were doing Brainfeeder in London.

The success of Los Angeles found Lotus self-described surrealist hip-hop fitting perfectly into Warps fusionary electronic legacy, and forecast soulful mutations for the international bass (so much more than just dubstep) scene. Kanye West and Radiohead commissioned remixes, and his world expanded. But in Ellisons mind, I always figured [that] when we do this third record, it's going to have to be the shit. I always had in the back of my mind that I have to really venture within.

Ill let Ellisons own words explain what happens next:

In the midst of the shit, my mom dies last October [2008], right when I started to get into a groove of being inspired. It was unexpected, super sudden, super terrible and, you know, it changed my life. I learned a lot about myself through making this thing. I hope it comes across.

The last year man for me it's just fucking unbelievable, both good and bad. I dont think you could ever truly comprehend it. I am working with Thom Yorke and then dealing with my moms death, and I have these crazy psychedelic experiences, and getting a little bit more famous in this whole music thing. So yeah, it was enough to inspire a new direction of music, joining with new people, look within and find my own understanding of life as I know it.

To hear Ellison tell it, Cosmogramma was built on the ideal of deeper, shared musicality.

The thing I noticed recently was the emphasis on technicality: people are just interested in how long we can program these snare drums, or how to make these baselines the craziest, earth-shattering things. It was really starting to piss me off, because I was seeing that a lot of the kids -- and myself included -- were losing the grasp of the process. Like, wait we're not trying to be technicians, we're trying to be musicians. I want to just make my shit the most musical shit ever. I dreamed to one day have strings, and one day [create] like the most fusion record. Now we can do this. We have the power to make the crazy shit -- with the technology and having more access to musicians around me. There is no reason not to take it further.

So Cosmogramma became a Flying Lotus production: initially conceptualized and with its core built by Ellison, but spotlighting the ideas of his collaborators as well as his own.

It started off as me working alone. I was making tracks that I knew I wanted, and I built on them as much as possible, hitting a point and saying okay this is the album. Then, I would sit back, just try to listen to what I think is happening and what's needed. I would pull some things to the side and collaborate with musicians. I told folks what I wanted, give [them] some ideas. I was also able to pull back some of my own ideas, and then when you get people collaborating, when I finally opened up my world for other people, certain things happened [in this process] that were way beyond what I imagined when listening: building on top of things, string arrangements [getting] written after the fact. It was a learning experience for me, like an alien universe man because I am so used to working alone.

As late as when we spoke in January, Ellison wasnt just refining Cosmogramma, he was still talking himself through making sense of just what it means in his life. He was mixing metaphors, but he was making sense:

You know, were still mastering [the record] and I almost threw this other song on, cause I really wanted it to go on the record. Its a great song, but its more recent. So, I cant do it. Why cant you do it, I asked?  The story I did [with this record] is meant to close a chapter of my life. It will be closed after we perfect and master, and [Cosmogramma] actually comes out, and then I have to move on; but that other song aint part of that, its a part of something else. Maybe we can tell that story another time.