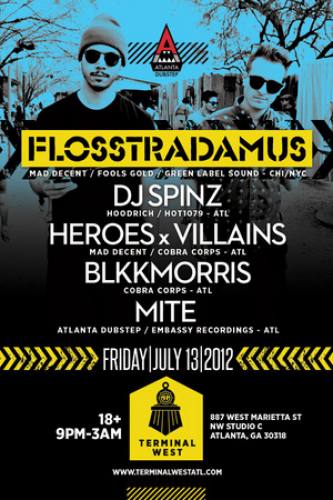 Flosstradamus, the oft-mentioned Chicago DJ duo comprised of J2K (Josh Young) and Autobot (Curt Cameruci) have been dominating the party scene nationwide with their tag-team DJ sets (3 turntables, 2 mixers) for just over a year and show no signs of slowing down. But let's get one thing straight, for the record: no more Wu-Tang requests, please!

Both established DJs in Chicago prior to their alliance as Flosstradamus, J2K and Autobot initially linked up while DJing a house party together in 2005, decided to start performing as a duo, and the rest is history. Gathering vast influences from their respective backgrounds in punk and hip-hop, Flosstradamus brought normally divided crowds together with their unique mixes of Baltimore club, hip-hop, house, obscure remixes, and juke. A monthly party soon followed ("Get Outta The Hood") at Chicago's Town Hall Pub, and within a year Flosstradamus turned a stagnant bar into the proverbial place-to-be, lines stretching down the block while sweaty kids crowd surf and get down inside. National press soon began to take notice, with features in URB ("Next 100 for 2006"), MTV (featured in "My Block"), and The Fader. Other recent accolades of note include 2006 appearances at SXSW, CMJ, Pitchfork Festival, Pop Montreal, parties for VICE, The Fader, Jane Magazine, DKNY, URB, and Puma, not to mention performances with Clipse, Common, and Rick Ross.

In the coming year, Flosstradamus plan to show off the rest of their multifaceted talent. Coming soon will be a full length Flosstradamus LP with J2K and Autobot on production duties, a mixtape with up and coming rappers The Cool Kids, and a European tour with A-Trak and Kid Sister.