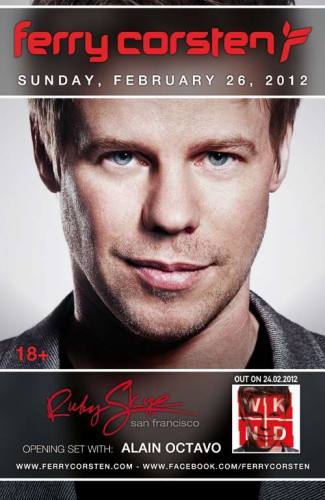 A pioneer and a dynamic force in the electronic dance music industry, Ferry Corsten never ceases to amaze, awe and even challenge his music contemporaries with the zest and talent he has in his productions and musical sets. He is widely recognized for opening the floodgates of Dutch producers and DJs to the international music scene.

Known for the countless aliases he has produced and remixed under since the release of his first record at the age of sixteen (16), Ferry Corsten has remained steadfast in pursuing his dream of spreading his unique sublime sound to music lovers worldwide. In his quest, he has gained not only respect in the music industry he has built around him but in similar musical genres as well.

Ferry had always been interested in music as a child. Tinkering with his father's record player at a young age, he saved up money to buy his first keyboard by washing cars, and selling mixed tapes to kids in his neighborhood. He then embarked on a live act performance with a friend and won his first award De Grote Prijs van Nederland Holland in 1989. He eventually released a record with a couple of friends when he was just sixteen years old and has evolved into releasing self-made productions. To this date, Ferry produces and engineers all his musical productions and compilations.

After initially producing some underground club tracks Ferry became more interested in clubhouse and trance. In 1996 Ferry achieved his first chart position in the UK single chart at #46 with 'Don't be Afraid' by Moonman, his first major and European breakthrough as a solo dance Artist, producer and composer.

Since Then, Ferry Corsten is the only electronic dance music artist to achieve the highest number of dance singles in the UK charts and currently has 10 gold singles in his studio.