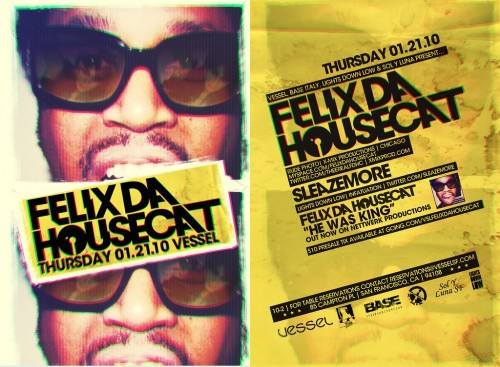 FELIX DA HOUSECAT – HE WAS KING
Quality house music returns with larger than life superstar Felix da Housecat, who takes to the decks for an extended set of his unique blend of house, rock and electro!
He's released his tenth - and quite possibly best - album and also just graced the cover of club bible Mixmag with hip-hop maestro Sean ‘Diddy' Combs. That's because back in March, he headlined Mixmag's Main Event 2 at Cameo alongside DJ buddies Simian Mobile Disco, A Trak, Junior Sanchez and DJ Mehdi. ‘We All Wanna Be Prince' is pure perfection – indeed, it's his best since ‘Ready To Wear' and a record only Stallings could concoct. “That's a good comparison,” he smiles. “It's sort of like a tribute but it's sort of not - I didn't want to insult Prince! Every lyric on that record is from a Prince song.”
Sleazemore’s personality in American electro culture is big and huge like the ocean is deep. The ever-ready party machine has been known called the antithesis of many bad decisions. He’s shared the stage with Simian Mobile Disco, Green Velvet, Justice and the Ed Banger Crew, MSTRKRFT, Boys Noize, Miss Kittin, Tiefschwarz, the Cool Kids, Matthew Dear, the Sounds, Sinden, Crookers, A-trak, Trevor Loveys, Dj Craze, The Jaun Maclean, Tommie Sunshine, Groove Armada, Drop the Lime and countless others.