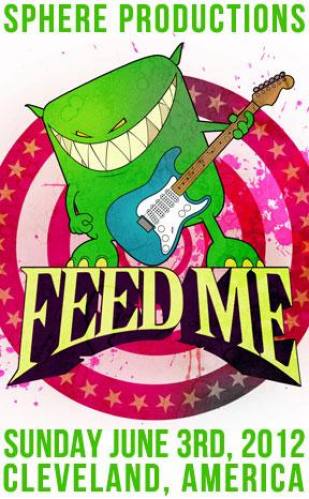 What: Feed Me @ Mulberry's Sports Complex

Feed Me sprung into the public eye with an 12" signed to Deadmau5's
label Mau5trap, making him the first external artist to feature on the
imprint. With releases 'The Spell' and 'Raw Chicken', the hard-hitting
electro combined with his trademark wide grin caught the eyes and ears
of DJs around the world. An additional release with Noisia's label
'Division' saw the repertoire - and the hype - grow.

Jon Gooch, the creator of drum and bass giant Spor, ventured into the
unforgiving genre of house, and the creature, fondly known of as Feed
Me was born.

"Joining the wundurful weeeerld of housse muzik. Hellews." were his
first words only just over 12 months ago, and now with an album in the
works, his frantic productions are making more noise than ever.

Feed Me has been chopping and injecting huge sound into a whole basket
full of pop tracks with his remixes; namely Muse, Wale & Lady Gaga,
Timbaland, Nero, Chase & Status and Gorillaz.

Set to release his first EP on his very own label 'Big Mouth' and
lining up this year with a flurry of support slots with Deadmau5, the
sharp-teethed monster is coming of age, and looking to make a big
noise in 2012.