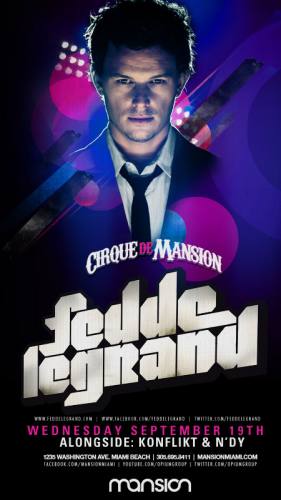 Fedde le Grand is, without doubt, one of the biggest DJs in the world. His skills both inside and out of the studio are the stuff legends are made of. Whether he’s demolishing legendary State-side festival Coachella on his debut appearance; racking up a straight hat-trick of Beatport #1’s in the overall charts with Autosave, Control Room and his massive remix of EBTG’s Missing, completing the year with So Much Love and the massive remix of Colplay’s Paradise; or touring most of the known world devastating clubland as he goes – le Grand is the name on everyone’s lips.  Join us at Cirque De Mansion presents Fedde le Grand at Mansion Nightclub in Miami Beach.