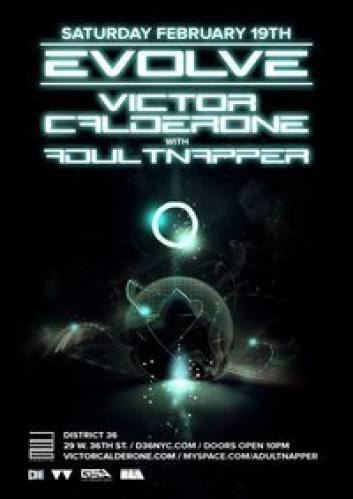 If creativity could be bottled and sold, Victor Calderone would be wealthy beyond comprehension. The multi-talented master of musical manipulation has helped redefine the role of the American DJ in recent years, and, in the process, has amassed an impressive array of artistic accomplishments. Equally adept both in the studio and in front of live audiences, Victor is a veritable virtuoso who has inspired, enthralled and entertained legions of sonic savvy devotees around the world. His expertise and imagination transcend conventional expectations allowing him to effortlessly bridge the gap between multiple genres of music and generations of listeners.

Introduced to New York nightlife at the impressionable age of 15 by his older brother Cesar, Victor quickly developed an intense passion for dance music that would form the foundation for the Brooklyn natives remarkable career. His first taste of success came less than a decade later when Sire Records Seymour Stein signed Program Two, Victors techno production partnership, to a record deal in 1991. The relationship fizzled after just one album, though, prompting Victor to reevaluate his musical future.

After a self-imposed hiatus during which Victor explored non-musical business ventures, he found his way back to the beat in 1996 when Athena, the woman who would eventually become his wife, encouraged him to return to the studio to create his first solo record, Give It Up. This signature hard-house anthem and its explosive follow-up, Beat Me Harder, both topped the Billboard dance charts, unleashing the meteoric Calderone phenomenon. Further inspired by New Yorks then-thriving club scene, Victor landed gigs spinning at high-profile parties on Fire Island and at legendary NYC nightclubs Limelight and Life, eventually leading to career-defining residencies at both Roxy in New York and Liquid in Miami. Then, just when he thought things couldnt get any better, Madonna called in 1998 and asked, So, do you want to remix my first single? Intrigued by Victors innovative musical vision and sophisticated style, Madonna bestowed upon him the ultimate compliment the opportunity to remix, Frozen, the lead single from her acclaimed Ray of Light album. She, as an artist, understands better than anybody the need to just let people do their thing, and thats the way shes worked with me, Victor proudly explains. She just sends me the vocal and she doesnt give me any guidelines. She just tells me to do my thing. Victor has since remixed nine other records for Madonna and has established an unprecedented professional and personal rapport with the Grammy-award winning artist.

Standing out among the many highlights of his extraordinary career is Victors experience working with Sting. Acting on Madonnas recommendation that he ask Victor to remix Desert Rose, the second single from his 1999 Brand New Day album, the British rocker not only called Victor to remix the record (something he had never done before with his music), but even went into the studio with him to re-record the vocals to match the remixed songs new dance-oriented rhythm. The song spent an impressive 80 weeks on the Billboard dance charts including nine consecutive weeks at No. 1 on the Hot Dance Music/Maxi-Singles Sales chart.

Few DJs or producers have achieved the level of success that Victor has so diligently earned, and membership in this elite club definitely has its privileges. Spared from the stress of pounding the pavement in search of work and the proverbial first big break, Victor now enjoys the luxury of carefully choosing each new project from a multitude of exciting offers. This rare creative freedom has also encouraged him to create more of his own original material. Following the success of 1999s Do It Properly, a joint venture with Grammy-winning remixer Peter Rauhofer, featuring C&C Music Factory vocalist Deborah Cooper, Victor once again enlisted Coopers dynamic talents in 2001 to record the #1 Billboard mega-hit Are You Satisfied, a record he both co-wrote and produced.

While it is nearly impossible to capture the essence of a live performance on a 74-minute CD, compilations do allow DJs to portray the music of the moment in a practical format that can reach even the most remote listeners. As part of a multi-record deal with Tommy Boy Music, Victor released his first beatmix CD, E=VC2, in 1999. Volume 2 followed in 2001 with sales and popularity of both compilations far exceeding all expectations. A third installment is forthcoming that promises to be darker and more progressive than its predecessors.

Victors studio work may have jump-started his career, but its his live performances that truly showcase his boundless energy and mastery of the turntables. DJing is a major release for me; its something I need in my life, he insists. It goes hand-in-hand with the production work and the studio work. If youre going to be producing dance music, youve got to be out there playing it and be in the clubs, so its very important to me.

Victor also understands and appreciates the importance of continually evolving as an artist. While he still enjoys remixing and playing select mainstream records, audiences will notice a distinct difference during his future live sets. Relying less on the diva house vocal anthems that dominated many of his past performances, Victor has reinvented his musical style and will now treat listeners to an edgier and more progressive sound. He will also focus on producing more original underground tracks to compliment his latest transformation.

Victor expanded his rsum in 2001 with bimonthly residencies at Stereo in Montreal, Canada and Tribal Sessions in Manchester, England. He also traveled overseas for performances at TLV in Tel Aviv, Israel, Cuvo Paradiso in Mykonos, Greece and LEnser in Paris, France. He has also arranged the music for the past several Dolce & Gabbana runway fashion shows in Milan, Italy. At home in the United States, Victor spins monthly at Crobar in Miamis South Beach, occasionally travels for special events around the country and is patiently waiting for the right opportunity to resume a residency in New York City.

Despite his many professional accomplishments, Victor still has some dreams to fulfill, particularly his desire to work on motion picture soundtracks. He is also currently working in the studio with a female vocalist he recently discovered to help develop her burgeoning career while further exploring the down-tempo side of electronic music. Victors Sensory Mix of Madonnas Dont Tell Me and his Calderone & Quayle Dark Side Mix of What It Feels Like For A Girl, both experiments in ambient electronica, garnered critical acclaim and impressed Madonna so much that she featured his version of the latter song on her Drowned World Tour.

Because his talent is so prominent, it is easy to forget that Victor Calderones career achievements are also the result of his true spirit of determination, as well as his dedication to perfection and persistence in an ultra-competitive industry. His many years of hard work and monumental success are only overshadowed by his sincerity, modesty, unwavering commitment to his craft and fierce devotion to his countless fans. A profoundly influential and inspirational talent, Victor has entertained millions of people, generously donated to charitable causes and earned the utmost respect of his peers, all while boldly pushing the universal limits of originality and ingenuity.

During an earlier interview, Victor summed up his prolific career perfectly when he modestly proclaimed, If it wasnt for the audience and the fans, I wouldnt exist, so I wouldnt have any right coming off to anybody like Im anything special. Im very grateful for all the support and everything thats been going on in my life. Its been amazing and Im very happy.

Adultnapper is a shadowy figure drawn from the dark reaches of Francis Harris imagination. Harris, a philosphy phD drop-out with punk rocker roots, hails from suburban Las Vegas but has called Brooklyn home for the past 9 years - a stretch in which he has gone from hating dance music, to establishing himself as an underground DJ/Producer with a unique sound and a global audience.

In 2007, seeking a platform on which to further develop the Adultnapper persona, Harris launched Ransom Note, a concept label with a cohesive narrative that unfolds with each release. Much like a graphic novel, using text, the ransom note, and imagery, a series of drawings by performance artist John Stroud, the labels jackets will tell the story of this anti-hero who is part creative genius gone awry, part tortured dystopic philospher, part paranoid vigilante outlaw.

Still, it is when Harris himself is in control of a dancefloor that Adultnapper is truly brought to life. Relying primarily on the ancient art of mixing two records, Harris precision skills and thoughtful programming have earned him a reputation as DJ equal to his regard as producer - an uncommom distinction. On the decks, Harris intricately weaves divergent strains into a thick, pumping groove that subtly rises and falls, drawing the crowd ever deeper within his emotion-laden, melodic journey. Circo Loco at DC10, Ibiza, Cielo in NY, The End, Mulletover in London, Weekend in Berlin, Pawn Shop in Miami, Avalon in LA, are just a few of the worlds discenring floors that have been graced by Adultnapper and been left clamoring for more.

In May 2008 he released his first mixed compilation for Audiomatique. Audiomatique Volume 2.0 is a descent into the deepest realms of electronic rhythm, veering from the spare crisp minimalism of Gui Boratto and Martin Eyerers The Beach, to the moody, strobe-lit melancholia of M_nus producer Gaisers Found Guilty Mix of Adultnappers own Juror no. 9. 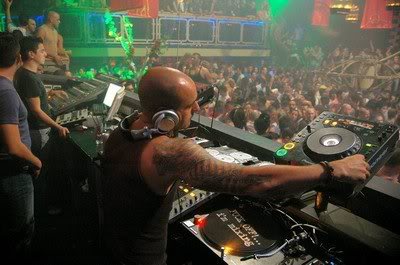