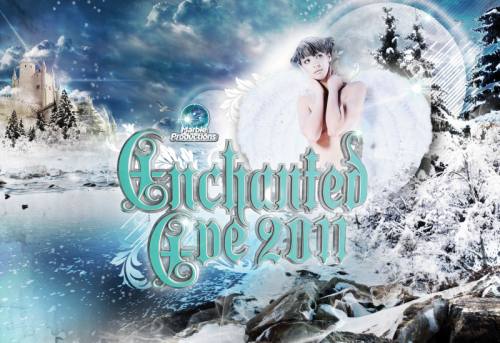 -Join us once again to ring in the New Year!

We will be putting together amazing headliners, local heroes and jaw dropping event production to give you another Enchanted Eve not to miss!

-AC Slater has established himself as one of the most in demand remixers and producers in the world right now and his growing reputation is showing no signs of slowing down.

Raised on 90's Hip-Hop and nourished by old school rave, AC has cultivated these influences to give birth to his own style of music production. A pioneer in the current electro and heavy bass sound, AC is one of the most talked about and sought after dance artists around. His tracks consistently top the Hype Machine and radio airplay charts, most notably his remix of the international hit "Show Me Love" by Robin S and his remix of underground classic "Turn The Music Up" being voted one of Moby's top 10 tracks of the decade.

With huge support from DJ's worldwide, the likes of Armand Van Helden, Crookers, Diplo, Laidback Luke, Fatboy Slim and his brother in bass Drop The Lime can't show enough respect for his work.

His debut single for the hugely influential Trouble & Bass label 'Take You', was received with massive acclaim and helped add more force to his already burgeoning reputation. After collaborations with Drop The Lime, AC has just dropped the eagerly anticipated 'Calm Down Trilogy EP' which is ripping through club speakers and setting dance floors alight around the world. Keep your ear to the ground.....

-Brooklyn femme fatale Star Eyes is known for throwing down raw, dirty underground tracks, from heavy house to grime bangers, speaker-rattling dubstep anthems to Miami bass. This 15-year DJ veteran has always been known for being on the cutting-edge of bass music. Throughout the '90s, California-born Star Eyes was best known as one of the first female drum & bass DJs in the US (and a resident of S.F.'s long-running Eklektic night); by 2002, she was half of the 2-step-meets-electro DJ duo Syrup Girls (called "New York's best-kept secret" by New Yorker music critic Sasha Frere-Jones). Star Eyes has toured the U.S. and Europe multiple times, touching down in such exotic locales as Cape Town, Sicily, and Warsaw, playing on the Vans Warped Tour (and for Southern Comfort and Scion), as well as headlining the world's best nightclubs, including London's Fabric, Berlin's WMF, and Paris' Social Club.

Since 2006, she has been a part of the world famous Trouble & Bass crew, which also includes Drop the Lime, AC Slater, and The Captain, along with affiliates worldwide. In June, the Trouble & Bass label released her first EP, Disappear, featuring original vocals, songwriting, and a mix of goth and rave influences whipped into a style she calls "haunted house." Star Eyes is currently writing songs for her next EP and doing remixes. Her vocals also appear on tracks by John B (Beta Recordings) and Passions (Kitsuné).

-For 21+ there will be a full bar in the main room area and bar stage.