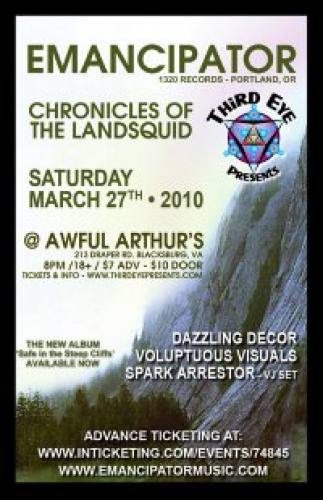 What: Emancipator w/ Chronicles of the Landsquid @ Awful Arthur's

Emancipator// 1320 Records// Portland, OR
Emancipator’s intricate, artful beats have earned him the kind of organic success 99% of artists only dream about. His debut album “Soon It Will Be Cold Enough,” was released only in Japan, but it filtered out into the rest of the world thanks to determined fans who got the music before the label did, ordered the expensive import or donated money in exchange for mp3s. But in September 2009, the album will be released September 8th 2009 in the U.S. on STS9’s own 1320 Records. The re-release is timed with Emancipator’s first North American tour, 10 performances across the country including three stops with Pretty Lights in the southeastern U.S and appearances at Trinumeral Festival in Asheville and Symbiosis Gathering in Yosemite.
“Emancipator’s debut album ‘Soon It Will Be Cold Enough’ beautifully mixes hip hop beats with guitar feedback and a delicate piano melody,” Rolling Stone says. “You can feel his energy when he performs. His face lights up and you can see how much he enjoys the music.”
Other reviews call the music “chill but captivating,” “fresh, clean production and sweet melodies,” and “damn cool.” Because it’s impossible to pin Emancipator to a specific genre, his fans struggle to describe the music: “Um, it’s really pretty, but like with SICK beats.”
Chronicles of the Landsquid// Charleston, SC
Live electronic power trio CHRONICLES OF THE LANDSQUID continues to evolve and explore uncharted musical realms. Their live shows feature a full dance party experience containing elements of electronica, drum & bass, breakbeats, dubstep, glitch, progressive trance, hip hop, and beyond. The main objective is get everybody out on dance floor...
18 and up event (18-20 MUST arrive before 10pm.)
SPARK ARRESTER VJ SET++
AOS LIGHTING ++
HUGE SOUND SYSTEM++
OVER THE TOP DECOR++
DANCERS++
LIVE PAINTING++