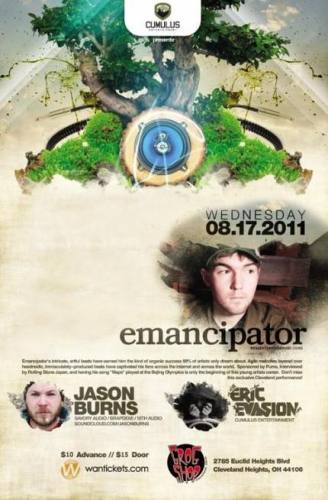 
Come see why this legend's has already earned spots on tour with Pretty Lights, Bassnectar, and countless major national festivals!


Local heavy hitters Jason Burns and Eric Evasion providing support guarantees this to be one special night. Don't miss out!!


Emancipator’s intricate, artful beats have earned him the kind of organic success 99% of artists only dream about. His debut album “Soon It Will Be Cold Enough,” was released only in Japan, but it filtered out into the rest of the world thanks to determined fans who got the music before the label did, ordered the expensive import or donated money in exchange for mp3s.


“Emancipator’s debut album ‘Soon It Will Be Cold Enough’ beautifully mixes hip hop beats with guitar feedback and a delicate piano melody,” Rolling Stone says. “You can feel his energy when he performs. His face lights up and you can see how much he enjoys the music.”


To some, it must seem like this young electronic producer came out of nowhere this year, but those in the know have been following Emancipator since he self-released his first album, “Soon It Will Be Cold Enough,” at the age of 19 in 2006. His agile melodies layered over headnodic, immaculately-produced beats captivated fans across the internet and across the world. “Soon It Will Be Cold Enough” was picked up by Japanese super-producer Nujabes, pressed in Japan and sold 5,000 copies in the first six months. Emancipator landed a Puma sponsorship, gave an interview to Rolling Stone Japan, and even had his song “Maps” played at the Bejing Olympics.


His latest album “Safe In The Steep Cliffs” blends new instrumentation and organic samples with the signature Emancipator style of clean production, silky melodies and addictive drums. Dense layers of choirs, horns, American folk instruments such as the banjo and mandolin, violin and some distinct Asian influences make for a playful but refined album built out of intricate tracks listeners can enjoy on as many levels as they want. Dance to it, chill out to it, immerse your mind in it.