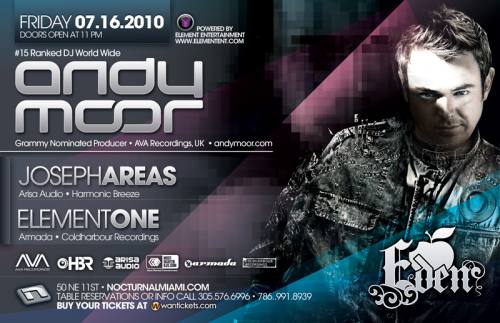 ANDY MOOR:
Andy Moor (born Andrew Beardmore on January 16, 1980 in Stoke on Trent, United Kingdom) is one of the world's most credited trance and progressive producer-DJs. He has used multiple aliases in the past (Dub Disorder, Dwight van Man, Sworn) and has been part of Indigo, Leama & Moor, Lewis & Moor, Tilt, Whiteroom, and Zoo DJs. He was voted 30th 2 years consecutively by DJ Magazine in 2005 and 2006 by dance music fans. In 2009, he was ranked 15th, named Best Trance Producer and Best Trance Track at the 2004 Trance Awards, Best Dance Record at the 2006 International Dance Music Awards, and nominated for a Grammy Award in December 2008, for his remix of Canadian artist Delerium with "Angelicus" featuring vocals from Isabel Bayrakdarian.
Moor has produced and remixed artists Britney Spears, Avril Lavigne, Paul Oakenfold, Nadia Ali, Brian Eno, Tiësto and Arthur Baker as wells as the album Explorer with Tilt and Common Ground as Leama & Moor.
Andy Moor's remix of Nadia Ali – Love Story reached #1 on the Billboard Breakout Chart, the Billboard Dance Chart and Beatport Trance. A new mix compilation series, Breaking the Silence was released on his own record label, AVA Recordings, capped by a world tour.
Moor started working with music at five when he mastered his first piano piece and started DJ-ing at thirteen.
PAOLO MOJO:
Whenever people are touted as an ‘overnight success’, it usually means they’ve got years of hard work behind them. This is certainly true of Paolo Mojo; a DJ since 1991 who has clocked up sets from China to Chelmsford and had a hand in nearly all aspects of the dance music business..
Paolo exploded on to the international scene in 2001 to unprecedented acclaim with the release of his double CD mix, Music Is Freedom. Highlights included winning the Muzik magazine Bedlam competition (and a subsequent nomination for ‘Best Bedlam DJ’ award at their annual awards) and being chosen as the winner of Rapture TV’s