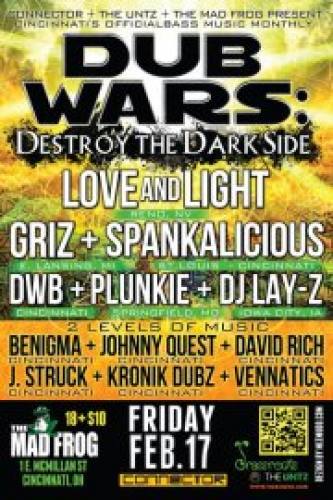 What: Dub Wars: Destroy The Darkside

Comprised of the musical talents of Matt Madonna and Ryan Anderson, Love and Light hails from the high desert region of the Reno/Tahoe Basin. Creating music that touches their hearts and elevates their souls, the duo's goal is the uplifting of people across the world through melodic synth lines, complex chord structure, intricate rhythms, and funky, chunky bass lines. Though having a strong focus on midtempo bass music, their span of producing talents are limitless, crossing into the realms of melodic dubstep as well as half-time drum and bass and four-on-the-floor bangers. Whether it is sweaty club, a beautiful outdoor festival setting or enjoying a night at home in the lab, Love and Light music moves humans in a vibrant and deeply conscious way.

"A true pioneer and master of musical expression, GRiZ (Grant Kwiecinski) stands head-and-shoulders above the competition in terms of the sheer variety of his ever-evolving technical prowess. A tremendously passionate and soulful producer, GRiZ has a peerless knack for creating profoundly engaging melodies to offset the presence of his phenomenally designed bass. Where many artists become mired in a over-simplified and standardized method of production for the sake of creative efficiency; GriZ has no qualms sacrificing speed for the sake of quality, technical diversity, and an unrelenting devotion to progress and dynamism.

Beginning his saga as a producer at the young age of fourteen, it is immediately evident that his talent and devotion will lead him on a journey of exceptional musical diversity and exploration. From funky rhythms to jazzy melodic embellishment, GRiZ effortlessly incorporates his instrumental zeal for the saxophone with his lifelong dedication to soulful, bass-infused beat-making. This is only the beginning for Grant, and already the stylistic range of his material is both inspirational and utterly awe-inspiring." -Written by Ethan Baer (SubSynthesis.com)

-"Past Dues" (self release end of january)

Cincinnati's own DWB is a producer/dj with a unique sound and expert production skills. His remixes have garnered attention on high profile blogs, and multiple record labels. He effortlessly blends intricate programming with mind blowing bass to create a sonic masterpiece. This artist ties together heavy dubstep and glitchy electro with a flavor that distinguishes his sound from any one genre. DWB brings the heat with his signature style and showcases why he’ll be making waves in 2011 and beyond.