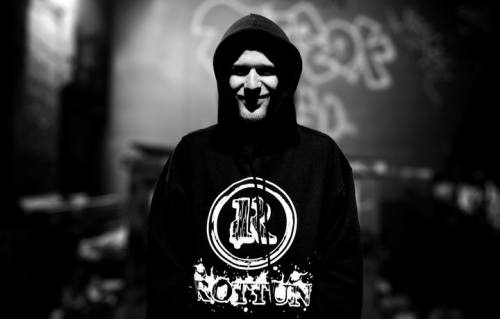 Downlink has been punishing dancefloors all over the planet with his heavy brand of bass. With roots in Jungle & DnB, he is no stranger to the vile side of subsonic dance music and has set out to explore a frantic, adrenaline fuelled style, influenced by everything from heavy metal to astrophysics. He is a Rottun Recordings regular, but has also released on some of the biggest labels in the game like Mau5trap and OWSLA. While consistently coming up with sick material time after time, he has gained DJ support from all of the biggest names in the scene. His successes on the Beatport charts have been extraordinary. He managed to hold down 4 of the top 10 spots in dubstep at one time and has had multiple tracks hit #1 in both dubstep and drum n bass. Recently Downlink's skills have landed him a prominent role in the production of legendary nu-metal band Korn's tenth studio album. His keen ear for sound even led him to being given the honour of mixing the album. He then went on to support the band on tour in America and Europe, playing to massive arenas, time and time again leaving crowds stunned with his energetic performance. Downlink is not one to be pigeon-holed and is constantly on a quest to evolve and refine his sound. With this in mind, one thing will always remain constant - a pure unadulterated heavy listening experience…

At a time when headline "DJs" shamelessly play pre-programmed or pre-recorded sets and the masses mindlessly embrace the charade, Dieselboy stands out as a rare virtuoso of the art and craft of live DJing. His focus on creating complex, high voltage, unique mixes every performance has created legions of loyal fans around the world. Very few artists mix live on three decks with more precision, intensity or finesse.

For over two decades one of the world’s great ambassadors of drum ‘n’ bass and more recently dubstep, Dieselboy, also known as Damian Higgins, is America’s most iconic underground bass music curator and pioneer. He was the first drum ‘n’ bass artist to chart a single on Billboard’s dance chart with “Invid” in 2000, and the first American voted into the UK-based Drum & Bass Arena Top 10 DJs online poll in 2004. He has appeared on magazine covers, been heard on MTV, ESPN and numerous video games, and sponsored by DC Shoes and Pioneer Pro DJ.

Dieselboy’s DJ career began in northwest Pennsylvania DJing high school dances, and progressed as a University of Pittsburgh student learning to beat-match vinyl live on college radio and playing trance, happy hardcore and breaks at house parties. His 1994 mixtape “The Future Sound of Hardcore” led to out of town bookings and his ensuing popularity and skills led to the honor of being the first American asked by a British drum ‘n’ bass label to mix a compilation (“Drum & Bass Selection USA,” 1996).

A passionate connoisseur of food, books and film, Dieselboy has continuously raised the bar for mixtapes and mixed CD compilations as art forms, and each from 1992 to his February 2012 tour de force “Wake The Dead” stands the test of time. State of the art showcases of producers and graphic artists of each respective era, Dieselboy’s mixes have been described as “cinematic” and “intoxicating.”

An inspiration for generations of DJs, Dieselboy’s longevity and relevance in a mercurial industry is a tribute to his relentless drive to create “amazing” experiences for his fans in their iPods and at his legendary live shows.

Dieselboy fans praise his skills as “genius.” Says The Destroyer: “I don’t fuck around.”

Taylor Scott and Paul Ollinger, known as Mantis, are a relentless duo. Having begun their musical careers with metal & deathcore, the transition to heavy bass music was not so much a step down in intensity, but a slide into a world with spectacular tools to mix dense layers of music in new ways, and deploy it with force. Mantis was formed in early 2011 to test the boundaries of metal-influenced production, and plunge the result into a wash of haunting atmospheres. Mantis wants to provide “music to make you feel like you’re somewhere else, and you’ve never been more stoked to be there.”

With that target in sight, 2011 was a smashing first year; the momentum began in Atlanta, and overflowed with releases on labels such as Play Me, Heavy Artillery, BroTown Records, & Abducted Records. A standard was set with 2011's "All Worlds", their first EP, breaking the top 10 on Beatport's Dubstep releases, and held with 2012's "Futures" scoring #5 on Beatport's overall chart. The support of tastemakers such as Liquid Stranger, Downlink, Figure, Cyberoptics, Diesel, Genetix, Persist, & Sluggo, points to an accomplishment of musical influence on an international scale, and the potential for much more.

A history in Atlanta's metal scene, playing in acts such as WLTP and Attila, provides Mantis' cornerstone of fierce stage skills. Having become known across the USA for throwing down an aggressive live show with unmatched energy and only the heaviest bass music, Mantis' reputation stands as being one of the gnarliest new production teams in the scene.

With packed crowds at hand, and Beatport charts at their feet, only one goal remains- to raise the awareness of metal-influenced bass music... oh, and world domination.