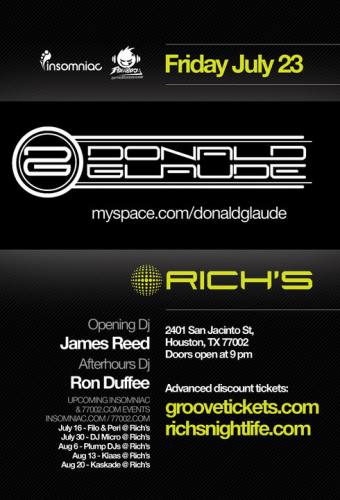 Insomniac and Freakboy Present:
Donald Glaude at Rich's
Featuring:
Donald Glaude [ Durty Records, Eden Records // CA ]
Donald Glaude is a house music artist, DJ and remixer, and is consistently ranked as one of DJ Mag's top 100 DJs. As a kid Donald was classically trained in the upright bass and violin. After hearing early funk records, he began experimenting with tape decks and a primitive radio shack mixer at home in Tacoma, Washington. He began playing at nightclubs by the mid-1980s and began gaining name recognition in early turntablism. In the early 1990s when the rave scene took hold up and down the west-coast Donald had an entire Friday at the Underground nightclub in Seattle. His clubnight showcased many now famous DJs from around the world. Donald, along with DJ Dan in San Francisco and Ron D Core in Los Angeles helped define west-coast house music through the 1990s.
Donald Glaude is a pioneer of House Music and is doing what a lot of other world class Djs aren't. He has been currently playing the Central California region and has already made a name for himself there. Modesto is just minutes from the new UC Merced and an attractive place for House Music enthusiasts around the globe. Donald Glaude has put out multiple records of his own songs and vanity labels Durty Records and Eden Records targeted to professional DJs while making digital releases on Beatport. He is in demand worldwide as a DJ and as a producer and re-mixer.