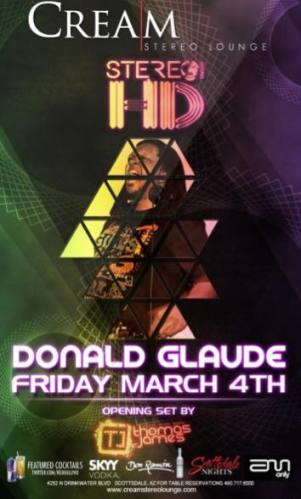 
Donald Glaude made his first appearance at Stereo Fridays on April 9th 2010. This year we bring him back to the to the new and improved STEREO FRIDAYS HD for his yearly residence at Cream Stereo Lounge.


Donald Glaude is a pioneer of House Music and is doing what a lot of other world class Djs aren't. He has been currently playing the Central California region and has already made a name for himself there. Donald Glaude is in demand worldwide as a DJ and as a producer and re-mixer.


Join the revolution with Scottsdale Nights and the Cream Team and help us continue to dominate Friday Nights in Old town Scottsdale.