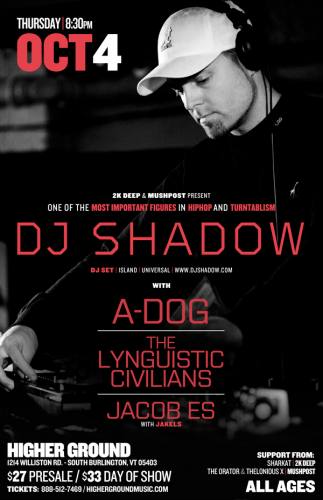 One of the most important figures in hip hop and turntablism

DJ Shadow (born Josh Davis) is widely credited as a key figure in developing the experimental instrumental hip-hop style associated with the London-based Mo' Wax label. Inspired by hip-hop's early years, he then grew to absorb the heyday of crews like Eric B. & Rakim, Ultramagnetic MCs, and Public Enemy; groups which prominently featured DJs in their ranks.

Josh "Shadow" Davis had already been fiddling around with making beats and breaks on a four-track recorder while he was in high school in the NorCal cow-town of Davis, but it was during college that he co-founded his own Solesides label as an outlet for his original tracks. Hooking up with Davis' few b-boys (including eventual Solesides artists Blackalicious and Lyrics Born) through the college radio station, Shadow began releasing the Hip-Hop Reconstruction mix tapes in 1991 and pressed his 17-minute beat-head symphony "Entropy" in 1993. His tracks spread widely through the DJ-strong hip-hop underground, eventually catching the attention of Mo' Wax.

My name is Shar and I'm a Capricorn. I like sandwiches, jokes, ponds, bacon, and foraging. I'm also a DJ. I've loved music as far back as I can remember and have gone through many phases throughout the years. From top 40, to hardcore, then rap, dancehall, roots, miami bass, jambands, and jazz....pretty much in that order. I've also been a part of Burlington's alternative radio station, 90.1 WRUV for 7 years and counting, doing weekly late night mix sessions within the realms of Drum n' Bass, Dubstep, Electro, Breaks, House, and Downtempo. If you're still reading this I owe you a beer.

MUSHPOST serves as a curator of unique events in Burlington, Vermont and as a common tag for a collective of DJs driven to promote compelling music. Inspired and fed by a hyperactive global culture focused on low end exploration & creation, there are no restrictions. High production value is cherished and progress is expected.

DJ A-DOG from Burlington Vermont,has been a fixture in the underground Hip-Hop/DJ culture. His musical diversity is displayed in each and every one of his performances, blending & cutting up everything from jazzed out Hip-Hop grooves, Funk, Reggae, Soul, Funk and Electro. A-Dog has toured with Mix Master Mike and has shared the stage with Snoop Dogg,The Wu-Tang Clan,Nas,Damian Marley and many other underground & mainstream artists.He has experience with travel since forming business relationships with companies like Burton Snowboards,SkullCandy, Nike and Analog over the years. He has been producing remixes & blends along with numerous mixtapes since 1995, as well as designing the graphics/video promo etc. As of this year he made his international debut. Traveling to Europe to rock the decks for Pirate Snowboard Films 'Bottom Line' global video premier in Innsbruck Austria this fall.

Hailing from the green hills of Burlington Vermont, the Lynguistic Civilians have been making music together since 2009 to bring a new electrifying, engaging and authentic sound to the world of Hip-Hop.

With six diverse personalities all mixed into one group the outcome of the music is like none other. Taking everyday life from five points of view and turning it into original songs comes naturally for this crew, and they will stay telling you their life for years to come.

Get all the latest on The Lynguistic Civilians at: