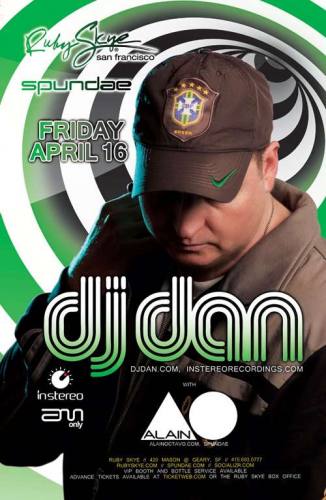 Ruby Skye & Spundae Present
DJ DAN
Friday, April 16
A native of Olympia, WA, DJ Dan first experienced music as a welcome escape, surrounded as he was by nine brothers and sisters. By age 14, he'd figured out how to rig his tape deck to the turntable to record to tape. Around this time, he also developed a passion for clothing design, so much that he was later accepted into Seattle's prestigious Thomas Edison School of Design, from which he graduated at the top of his class. Attending his first rave in L.A. in 1991 put his design career on hold. Something flipped, he recalls. I realized my true calling. I knew this was something I must do. Dan spent every waking minute learning the art of mixing, scratching and programming, and soon he was ready to test his mettle in the club scene.
His involvement with the Bay Area DJ collective Funky Tekno Tribe was a significant milestone on the establishment of what is known today as the signature West Coast house sound. The sounds of the DJ's--which included fusing funk and hip-hop with breaks and melodies--were a great influence on Dan, and caused him to revisit those sounds he loved so much in his youth, thus morphing into his own personalized sound. DJ Dan's international profile expanded exponentially with the release of the groundbreaking Loose Caboose by the Electroliners, a classic track he co-wrote and co-produced with Jim Hopkins. It was soon picked up by XL Records in the U.K., which led to a fruitful partnership between Dan and famed DJ Carl Cox. The Electroliners continued to create many remixes, which only bolstered DJ Dan's reputation as a producer. Since then, he's remixed projects for Keoki, Groove Armada, Filter, A Tribe Called Quest, Olive and Orgy, the latter of which obtained platinum status with Blue Monday.
As for his own persona, DJ Dan defies the conventional wisdom that the DJ has to retain a kind of standoffish mystique. I got into this, says Dan, because I love how people unite on the dance floor, bringing in their own energy and excitement. So, I never turn my back on the crowd. And they've never turned their backs on him. DJ Dan remains a towering figure in the world of dance music, always a step ahead in bringing new musical styles to his fans. He is a DJ for the people burning up dance floors around world.