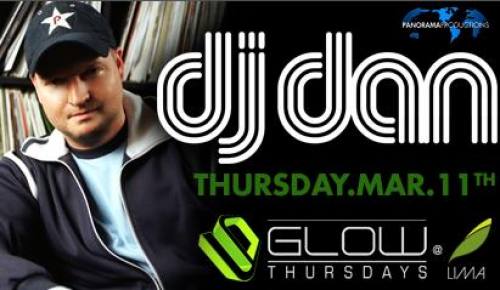 DJ DAN
Opening set by
OMID S
(Rapid Records, Baroque Records, myspace.com/omids79, DC)
There are many reasons why DJ Dan has been tagged America's Hardest Working and Most Beloved DJ; since his start in 1989, Dan has been at the forefront of dance music culture. Beginning in the early days of the Rave scene in 1991 when Dan would play multiple parties every throughout the weekends, ending it at his own legendary afterhours club No-Doz. He has been setting trends in dance music ever since.
In 1993, Dan sought to push the boundaries even further. After a move to San Francisco, he and two friends formed the now legendary group Funky Tekno Tribe. Through an innovative and clever approach to marketing double pack mixes of his live sets from the Funky Tekno Tribe, he was one of the first to user in the wave of mixtape culture that became dominant throughout the 90’s electronic music scene. This marked the start of the burgeoning Breakbeat craze that Dan pioneered by combining House, Breakbeat dubs and Techno into a psychedelic fusion dubbed as the "West Coast House Sound".
As demand for his DJ skills continued to come in from the four corners of the globe, Dan began dedicating more time to original productions. His 1995 single, "Loose Caboose," by the Electroliners (a collaboration with Jim Hopkins), proved one of the definitive tracks of the breakbeat era. Later, his 1998 classic "That Zipper Track," on DJ Dan Presents Needle Damage, put a fresh new spin on the genre, and his #1 Billboard Club Hit “That Phone Track” (2003) proved a new level of maturity in his studio aesthetic. It is no surprise that visionary artists come to Dan looking to tap into his unique sound, Dan's remix discography reads like a “who's who” in the industry. With remixes of artists such as Depeche Mode, New Order, The Pussycat Dolls, and A Tribe Called Quest, as well as his remix of Orgy's cover of "Blue Monday" earning him his first Platinum record in 1999.
Keeping a firm finger on public tastes and new sounds while rising above fleeting trends, has allowed Dan to remain ahead of the pack over the course of his career. Playing a staggeringly diverse array of venues and festivals across the globe such as Amnesia in Ibiza, Cream in Liverpool, Pacha in Buenos Aires, London's Ministry Of Sound, Gatecrasher, Fabric, Coachella, the Love Parade, Virgin Fest, Mayday-Berlin, Creamfields, Ultra Music Festival, and SAMC, the list is endless. Comrade-in-wax Carl Cox handpicked Dan to join him on his 2000 Phuture tour of Africa and Europe, while Moby recruited him to join an all-star line-up including David Bowie, Busta Rhymes, Tiesto, and John Digweed on the Area2 Tour. In 2008, Dan embarked on a North American tour promoting his own innovative label "InStereo Recordings", inviting good friend Donald Glaude along for a historic 2x4 DJ set.
In 2009, Dan plans to release his debut artist album entitled "Future Retro". In Celebration of Dan's pioneering history, he has created something special with this album. A two part offering in one; selecting songs that influenced him along the way and recreating them with a sonic context of the present, as well as an assortment of fresh new originals. The project is the culmination of all things great on the dance floor, and fuses these classics with Dan's unique blend of funky driving electro. From Mr. Fingers to Frankie Knuckles...Chicago to Detroit to San Francisco and back again. When asked about the album Dan said “This album is a project I am immensely proud of and the timing just seemed right". Baby Wants To Ride…Ride With Us!
Featuring
-State of the art sound, lighting and visuals
-Outdoor Patio (smoking allowed)
Glow Thursdays at Lima – Ages 21+
1401 K St. NW Washington D.C.
Tickets & Info: www.clubglow.com Direct: 202.271.1171 Tables: 202.789.2800
Facebook: Glow Fan Page & “I Love Glow” Group // Myspace.com/clubglowdc
Twitter – ClubGlow // Blog: www.dcclubbing/blog
BECOME A “FAN OF GLOW” ON FACEBOOK AND GET THE BEST DISCOUNTS TO ALL GLOW EVENTS!!!