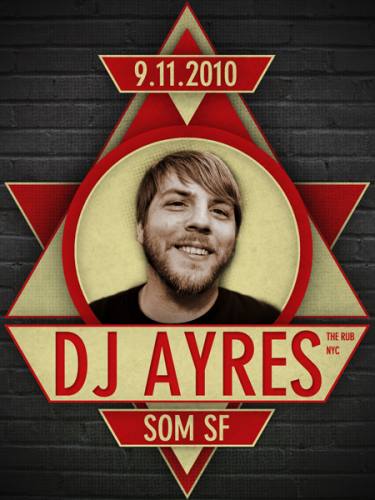 Rock It Science Laboratories and Hacksaw Entertainment, two of San Francisco’s most established purveyors of cutting edge dance music, announced today that they will team up for the first time to present the world renowned DJ Ayres of The Rub in a rare SF appearance Saturday, September 11. Ayres will travel from New York City for an exclusive performance at Som, the new hot spot in the Mission District. Rock It Science inventor ...Eric Sharp and Hacksaw resident Shane King will both DJ in support.

Originally from Mississippi, DJ Ayres is famous for being the founding father of The Rub, the Brooklyn monthly party that swiftly gained a reputation for being “The Best Party in NYC” (New York Press) back in 2002 and to this day remains one of the staples of NYC nightlife. Combining everything from 80’s pop and disco to house, reggae and hip-hop, The Rub provides “something for everyone, no matter what you’re into,” (resident Cosmo Baker) and in the process helped launch DJ Ayres into worldwide consciousness as one of the best mixtape-making, party dj’s around. Further cementing his status as a key player in American club culture is the fact that Ayres has released over 20 remixes, both on his own T&A label plus Money Studies, GAMM, ESL, Scion A/V and more.

Rock It Science Laboratories is a fresh music label that zooms forth from one of San Francisco’s favorite warehouse party-maker crews turned club promoters, event tacticians, musicians and remixers. Rock It Science holds down a weekly event on Friday nights at Temple Nightclub, one of SF’s most respected and coveted venues with top tier weekly guests from across the globe spanning the spectrum of dance music.

Hacksaw Entertainment is a San Francisco based concert production & promotion firm which strives to put on the very best electronic music shows on the west coast, featuring both major talent and their favorite up-and-coming acts. Hacksaw burst onto the scene and quickly established a major reputation for being ahead of the curve musically, consistently delivering superb fresh talent and filling a sorely needed niche.

SOM. is the new "go-to" spot in the heart of the bustling, ultra-hip Mission district. In Portuguese, SOM means not only 'sound', but also the feeling that resonates within a person when they connect with an experience. SOM recently won best new club in both of the Bay Area’s most well-read periodicals, the SFWeekly and the Bay Guardian.