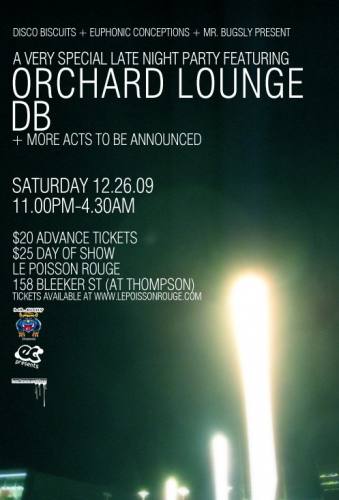 The Disco Biscuits, Euphonic Conceptions, Mr Bugsly Present
A VERY SPECIAL LATE NIGHT w/
Orchard Lounge
DB
This is a general admission standing event.
Artists:
Orchard Lounge
Downtempo, space disco, house, tech, b-boy era electro, hip hop, soul, and funk – if you can move, Orchard Lounge will back you up. Formed in Chicago in 2000, OL is the collective of Ben Silver, Spencer Lokken and Bethany Lokken. This versatile trio has enlightened dance floors nationwide with their eclectic mixes, from sunset chill-out to bass-dropping tech house, and an array of other futuristic sounds. Theirs is a democratic mission: to expose as many people as possible to the artists they admire and respect. What sets Orchard Lounge apart from other club DJs is, well, you won’t always find them in the club. In recent years they’ve built a reputation as a hard-touring festival act and set-break crowd favorite, frequently supporting The Disco Biscuits, Sound Tribe Sector 9, The New Deal and Future Rock. They’ve also played alongside heavyweights like Bonobo, Lindstrøm, DJ T, Jamie Jones, Booka Shade, Metro Area, and Kevin Yost. As The Disco Biscuits’ de facto hype men (and woman), they’ve had the rare pleasure of performing for thousands at world famous venues like Red Rocks and the Hammerstein Ballroom, constantly keeping the crowd engaged with a unique mix of turntable and live-band improvisation. Outside the booth, the members of Orchard Lounge continue making music: Spencer is a classically-trained violinist and regularly plays with a chamber ensemble in Chicago; Ben has studied guitar for more than ten years, and continues to write and produce. Bethany quit the clarinet in college and has never looked back. Despite their affinity for live music, OL's focus hasn't shifted since the group's inception almost a decade ago: to provide sophisticated and stylish DJ sets that are appropriate in a variety of settings, from the dancefloor to the couch.
Orchard Lounge is thrilled to have been selected as one of Smartar's five resident DJs for 2010, and they look forward to spreading their unique brand of electronic funk to the masses.
DJ DB
DB, sometimes known as DJ DB, played an important role in bringing the sound of drum'n'bass to American shores. Emigrating from London to New York in 1989, DB kept tabs on the developing sounds of the British dance underground, and founded the NASA club, which was credited as the first American party to showcase the harder sound of breakbeat techno (which eventually became jungle/drum'n'bass).
In 1993, he became the A&R director of sm:)e communications, one of the first American labels to release drum'n'bass music in general, as well as one of the first to showcase American artists in the style. In the meantime, DB continued his work as a DJ, and also mixed the volumes in sm:)e's excellent History of Our World compilations. In 1996, he co-founded Breakbeat Science, the first record store in America devoted exclusively to drum'n'bass and all its stylistic offshoots. DB departed sm:)e in 1998 to found his own label, F-111; the following year, his mix album Shades of Technology became one of 1999's more acclaimed and admired drum'n'bass mixes. DB next masterminded a Bukem-type compilation of F-111 tracks, The Higher Education Drum'n'Bass Session, which appeared in 2000. His official follow-up to Shades of Technology was released on the new Breakbeat Science imprint in summer 2001, under the title The Secret Art of Science. By 2005 he was on his fifth volume of the Breakbeat Science: Exercise series.