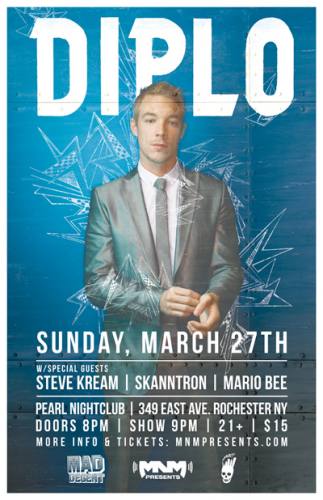 
Known internationally as a curator amongst the world’s most cutting edge DJs, producers, and musical movements Wesley Pentz (better known as DIPLO) has experienced a variety of successes. The last few years have been spent running through the club circuit and having chart-topping hits with refreshing irreverence. Born in Tupelo, Mississippi, in 1978, Pentz spent most his childhood in Florida working in his fathers bait shop and being turned onto music thru then new mediums like MTV. Drifting North thru the state came Miami Bass and from the West came the sounds of Southern Hip Hop artists. The musical influence and variety coalesced and at 18 Pentz moved to Philadelphia for college at Temple University to study Film & Music. While a student he took a job in the South Philadephia community as a social worker and created the influential Hollertronix club night, which was the beginning of his fledgling career as DIPLO.


In 2004 Pentz released his debut album as Diplo called, Florida. It received praise and accolades in the underground community. The music embodied on this album led to an introduction via an A&R man at XL Records to M.I.A. In 2004 he partnered with M.I.A. for the mixtape Piracy Funds Terrorism. Pentz’s cultural impact had started to snowball. Together they worked on her first album Arular and much of her second Kala, including the 2008 mega-hit “Paper Planes,” which reached No. 3 in the US Charts and earned him a Grammy nomination for Record of the Year. His production credits have evolved since to include Santigold, Lil’ Jon and Missy Elliot, while remixing works by Beck, Radiohead, Britney Spears and countless others. In 2009 Pentz teamed with frequent collaborator Dave Taylor (aka Switch) to release the futuristic dancehall album Guns Don’t Kill People… Lazers Do under the guise of Major Lazer, a Jamaican militant at war with an evil army of zombies, mummies and vampires.


Meanwhile, his record label Mad Decent has helped to introduce Brazilian baile funk, Angolan Kuduro and other marginalized music to clubs around the world, developing as a trendsetting force with which to be reckoned. With the same mission in mind, some of the varied acts Pentz has signed or produced include Rye Rye, Bonde do Role, Crookers, Blaqstarr, Boy 8-Bit, Buraka Som Systema, and Rusko, allowing Mad Decent to act as a launching pad or home base for many others while spreading its influence across the globe. Through the label, Pentz has founded a charity called Heaps Decent as a social relief program to help children in Australia as well as with additional efforts internationally. In early 2009 Pentz debuted his film Favela on Blast, a five-years-in-the-making documentary exploring the Brazilian slum favelas of Rio de Janeiro and the thriving baile funk music scene that exists within. He is currently developing a TV show to air in 2011.


Through a widespread assortment of releases and artists’ works – from cumbia to dubstep to punk and beyond – Diplo has shown dynamic range with interests that span far beyond any singular culture or musical realm, standing as a working model for the truly 21st Century artist.