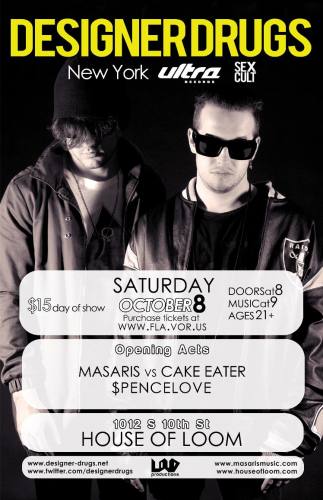 What: Designer Drugs @ House of Loom

After nearly 50 remixes the diverse electronic group released their debut album HARDCORE/SOFTCORE on Ultra Records in 2011 "I think we're making music for the apocalypse, The state of society is at a place where peoplejust don't give a fuck and that's what inspires our music." Spend a few minutes at one of DESIGNER DRUGS' live shows and you'll see the normally humble pair, spurred on by the intense energy of their music, transform into a different beast. "It gets pretty wild," admits Michael Vincent Patrick, 1/2 of the duo. “It's next level dance club shit that almost morphs into that '90s hardcore/punk vibe."

PREPARE YOURSELVES FOR DESIGNER DRUGS