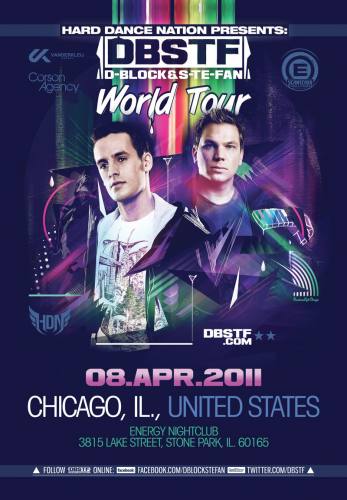 Tickets go on sale this Friday at www.clubtix.net

D-Block & S-te-Fan (Diederik Bakker and Stefan den Daas) are two hardstyle artists from The Netherlands. They started co-producing in 2004. Bakker grew up with his father producing electronic music, which allowed him to learn musical skills very early in his childhood.[1] Daas' inspiration comes from Happy Hardcore, which he was a large fan of in the 1990s. When they started to work as a team, they already performed at events such as Qlimax, DefQon 1, Thrillogy, and Q-Base. Originally, they owned their own label,"Next Chapter Records", however they were signed on with Scantraxx and now own their own Scantraxx sub label, Scantraxx Evolutionz. Bakker and Daas performed the musical anthem to Qlimax 2009,[2] called "The Nature Of Our Mind". This was several months after their first album, Music Made Addictz, was released.[3] D-Block & S-te-Fan have had several collaborations with M.C. Villain,[4] Deepack,[5] and DJ Coone.[6] They also did a remix of the Headhunterz & Wildstylez track "Blame it on the Music," which was featured on Headhunterz' 2010 Studio Sessions album.