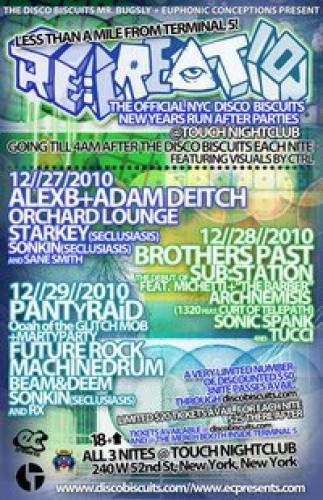 the Official Disco Biscuits After Parties

for the NYC New Years Run

New York, NY – The Disco Biscuits, Mr. Bugsly and Euphonic Conceptions are working together to present the Official After-Parties for the New York City leg of the Disco Biscuits 2011 New Years Run. The After-Parties will follow each of the three nights tDB are playing at Terminal 5 (December 27th, 28th and 29th) and will feature cutting edge music, lights, visuals, art, and more. Each event will run until 4:00 AM each night, at Touch Nightclub, which is a short walk from Terminal 5.

All three nights will feature a quality light show in addition to unique visual / projection installations by CTRL, a visual artist working with CG animation and realtime 3D who has done custom visuals for Thievery Corporation, among others, in the past. Floral arrangements will be provided by Matt DiPilato, and there will also be live painting by a number of local artists.

There are a very limited number of 3 night passes available now for only $50. From there, tickets for each night are a limited $20 per night and $25 there after.

PANTyRAiD (Ooah of the Glitch Mob and Marty Party)

ALL THREE NIGHTS TILL 4AM

LESS THAN A MILE FROM TERMINAL 5!

AND AT THE BISCUITS MERCH BOOTH INSIDE TERMINAL 5

A very limited number of discounted 3-night passes for $50

will also be onsale through DiscoBiscuits.com