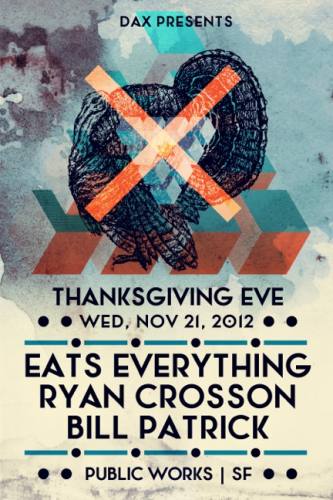 
Join us for the annual get down with another ridiculous lineup at Public Works courtesy of Dax Presents.

Few producers in the history of dance music have made such a rapid and far-reaching impact on the electronic music scene as Eats Everything aka Bristolian Daniel Pearce. In a matter of months he has defined a whole new genre of forward-thinking underground house music that draws elements from classic house, UK bass music, Detroit techno, jungle and early rave, paying homage to everything from Randy Crawford to Ray Charles and Murk to MK.

Eats Everything is at the forefront of a new wave of talented producers coming out of Bristol, the West Country’s Bass Central, that includes Julio Bashmore, Laurie Appleblim and Waifs & Strays. In addition to this, his now defunct ,‘Coat Of Arms’ side project with Chris James has already gained widespread praise with ‘This Is Something’ signed to Jamie Jones’ new fabric mix compilation from Bristol’s iconic Futureboogie label.

While some producers spend years finding their feet, Dan made a clear statement of intent with ‘Entrance Song’ his debut release on Catz N Dogz ‘Pets Recordings’ label that was chosen by Pete Tong as his runner up as biggest tune of last summer, only pipped to the post by Jamie Jones’ iconic remix of ‘Hungry For The Power’ by Azari & III. ‘Entrance Song’ was championed all summer long by the likes of Seth Troxler, Carl Cox, Jamie Jones and Jon Digweed and was a major contributing factor to him being charted as the number twelve most charted producer of 2011 on Beatport and the number 18 most charted producer on Resident Advisor, no mean feat given that he only started releasing records in the second half of the year. By the end of last year, Dan had set a record by being the first dance music producer to have two different tracks featured on two different shows on Radio One for thirteen consecutive weeks. With huge support from Pete Tong, Zane Lowe, Annie Mac and Andy George & Jaymo, Eats Everything has rapidly become the toast of the UK airwaves.

Following on from ‘Entrance Song’, Dan’s next two bass-laden bombs ‘The Size’ and ‘Tric Trac’ were picked up by Claude Von Stroke for his flagship dirtybird label, for release last October. Prior to release ‘The Size’ was made Pete Tong’s ‘Essential New Tune’ the first in a series of no less than five ‘Essential New Tune Contenders’ so far clocked up. Since then Dan has gone on to remix The Ting Tings, Jamie Jones, Totally Enourmous Extinct Dinosaur, We Have Band, Roy Davis Junior and Crazy P on a broad selection of labels including Get Physical, Shy FX’s Digital Soundboy, Classic, PMR, FFRR and Leftroom and Sony/Deconstructed.

Ryan Crosson makes house and techno inspired by the historical precedent set in his native city of Detroit and his adopted hometown of Berlin. His musical output is shaped by pioneering artists like Richie Hawtin, Kevin Saunderson and Moodymann in the US, in addition to European heavyweights like Pantytec, Ricardo Villalobos, and Thomas Brinkmann. Situated loosely between these two defining poles, alongside his partners in Visionquest: Shaun Reeves, Seth Troxler and Lee Curtiss, Ryan delivers a obsessive attention to the constant progression of his sound and embodies a ceaseless energy that carries itself from the studio directly into his live set and DJ performances. Whether it’s solo in the studio or as a guiding hand in the Visionquest label and DJ/production partnership, Ryan consistently chooses to steer away from the predictable circuit of so-called “underground” club hits, instead favouring a process of constant renewal, returning both to early influential material and to emerging sounds that depart from well-trodden trends. As a key member of Visionquest, Ryan is responsible for much of the concepting and day to day running of what has rapidly become one of dance music’s most cherished new labels. Between them, Ryan and his partners in Visionquest have honed a whole new landscape of lush, organic techno and more esoteric leftfield electronica, gambling against the predicable to introduce emerging talent like Tale Of Us, Maceo Plex, Footprinz, Laura Jones and Mathew Burton to the record buying public. Their efforts were rewarded when their label was voted number seven in Resident Advisor’s 2011 label poll, no mean feat given that it’s back catalogue has only recently hit double digits.

In the studio, Ryan’s production and sampling practices depart from the world of electronic music by accessing histories of sound, referencing musique concrete, 1970's funk, and East African jazz. This is best demonstrated by the evolution of his sound from minimal hits like ‘Gotham Road’ and ‘Hopskotch’, through to the organic underground house strains of his ‘Visionquest’ remixes of Kiki’s ‘Good Voodoo’ and more recently via his Visionquest remixes of David Lynch’s ‘Pinky’s Dream’ and Guy Gerber and P Diddy’s forthcoming ‘Eleven Eleven’ project. In addition to dancefloor bombs like ‘You’ve Got Me’ EP on Supplement Facts he’s also capable of conjuring up the haunting cosmic beauty of his recent ‘Birds & Souls’ project on Spectral Sound alongside the genre-busting sonic experiments that make up his recent DRM album collaboration with Cesar Merveille released at the start of the year on Visionquest.

In the past Ryan has released tracks on diverse and groundbreaking labels like m-nus, Telegraph, Trapez, and Wagon Repair and more recently Soma, Spectral Sound and Supplemental Facts. From the outset Ryan immediately gave himself over to a life of touring and performance that keeps a steady focus on both the avant-garde aesthetics and deeply emotional bonds of dance music subculture. Ryan’s back-to-back live sets with Lee Curtiss, at the sold out Visionquest showcase at fabric last year and at Movement in Detroit, stole both these shows boding well for 2012 which will see him repeat his live show at some of the world’s most famous clubs and festivals alongside a packed schedule of DJ gigs, both solo and as part of Visionquest, including his much anticipated new residency at Circo Loco at DC10 this summer.

In America, specifically NYC, Bill Patrick is a man of many accolades... Since his days as a DJ in legendary clubs such as The Limelight, Vinyl & Arc, he has charmed our hearts and moved our bodies. Not to mention being co-founder of the famed Robots parties and amusing us weekly as Robot Radio's alluring and witty host. Within the world of electronic music everyone has a tale about our friend Bill Patrick. Some funny, some sad, some tragic, most shady, but at the end of each story or any encounter with this demi god your left wanting more.

In 2008, this mythical creature, who by chance was reborn a man, relocated to Berlin. Why? Few know. Some say it was in search of gold, some suggest it was out of self loathing, those in his inner circle say it was to be closer to them. He says it was to challenge the European state of mind and how sexually active they, as a people, can become. In any event all legend and lore were left behind. So where has that left this man, this nu-romantic? I'll tell you, striving to be more. It doesn't matter that the only place he now plays are mega festivals like Sunwaves in Romania, or super clubs like DC10, Fabric, Cocoon and Kristal club,for those in the know. He wants to step out of his box and come to you, to educate the minds of the world with his deep, psychedelic take on contemporary dance music. With the help of his unwavering comrades; Lee Burridge, Seth Troxler, Ryan Crosson and Shaun Reeves, he is destined to thrive!