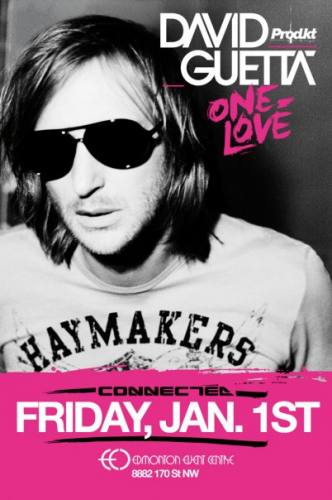 DAVID GUETTA
David Guetta's (pronounced GET-ah) career started at the age of 17, when he began playing hip-hop and house music in the nightclubs of Paris. Originally influenced by the hip-hop DJs he heard on France's Radio 7 station, he began DJing at Broad, a gay club in Paris. From 1988 to 1990, Guetta was a DJ playing house music on Paris's Radio Nova. In 1990, he released "Nation Rap", a hip-hop collaboration with French rapper Sidney Duteil.
In the early 1990s, he was influential in the rise of house music and acid house in Paris, playing in clubs such as Le Central in Champs Elysées and the Rex Club. It was during this time that Guetta met American singer Robert Owens, who was touring in Europe, and played him one of his own demos. The singer liked one so much that he decided to sing the vocals for it. Released in 1994, Guetta's first single, "Up & Away", was a minor club hit and is considered as one of the pioneering records of the French house genre. Also that year, David met his wife Cathy Guetta DJing at Les Bains Douches and together they organised parties at the Bataclan theatre in Paris. In 1995, David Guetta became the artistic manager at Le Palace nightclub and he continued to organise successful parties there and in other clubs, such as the "Scream" parties in Les Bains Douches.
Since 1996, David Guetta has also held events in Ibiza. "We were the first French to organise in Ibiza" he remembers, "It was different back then. The English DJs were laughing at us, but I was friends with Daft Punk and Cassius and one day they became famous".
In 2001, David Guetta and Joachim Garraud founded Gum Productions and in the same year Guetta's first hit single, "Just a Little More Love", featuring American singer Chris Willis and produced by Garraud, was released. Guetta's debut album Just a Little More Love was released in 2002 on Virgin Records and sold over 250,000 copies. The follow-up single, "Love Don't Let Me Go", was released in 2002. Other singles from the album include "People Come, People Go" featuring Chris Willis and "Give Me Something" featuring Barbara Tucker.
Guetta's second album, Guetta Blaster, was released in 2004 and contained the US Dance number 1 "The World is Mine" featuring JD Davis. In 2006 "Love Don't Let Me Go" was released as a mash-up with the Tocadisco remix of "Walking Away" by The Egg. The single, "Love Don't Let Me Go (Walking Away)" charted higher than the original release of the song.
Alongside CONNECTED Residents DJ's
Mikey Wong
Benny Hawk
Ryan Wade
Tickets:
First 400: $42: SOLD OUT!
Next 1000: $52
Thereafter: $62
Limited VIP Stage Side Seating: $75
Tickets available @ FOOSH, THE OCCULIST (WEM), TICKETMASTER.COM, EDMONTONEVENTSCENTER.COM
*****OFFICIAL AFTERPARTY AT TWILIGHT*****