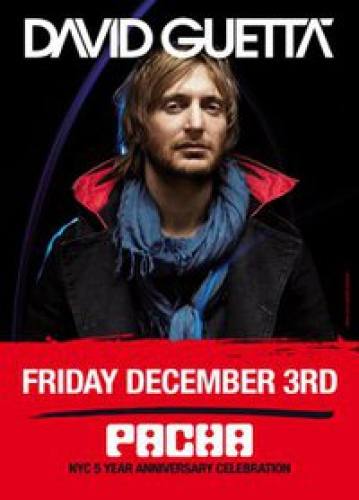 along with John Dahlback


Kicking off the 5-Year with a bang (or a boom-boom-pow?), Pacha welcomes Grammy Award-winning sensation David Guetta back to the booth from which he first rocked New York. In just four years, Guetta has gone from Ibiza’s favorite son and the creator of the infamous “F*ck Me I’m Famous” party, to every pop star’s go-to producer and an international star in his own right, gracing the cover of Billboard magazine and pumping out hits like Black Eyed Peas’ “I Gotta Feeling” to his own “When Love Takes Over” with Kelly Rowland. Working with luminaries like Rowland, Ne-Yo and even Madonna, Guetta is an unstoppable force, championing dance music amongst the masses and the elite.