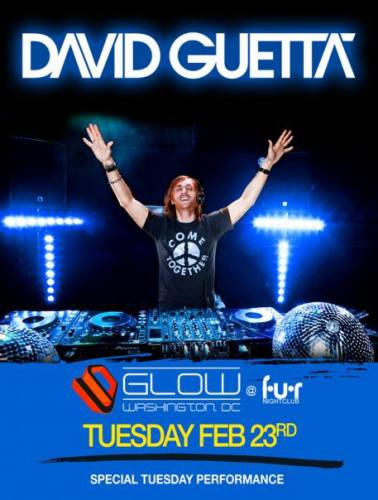 Panorama Productions presents
GLOW – Washington D.C. – www.ClubGlow.com
Special Tuesday GLOW Event
Doors Open 9pm
Tuesday February 23rd 2010
DAVID GUETTA
(www.myspace.com/davidguetta | www.davidguetta.com | www.FMIF.fr)
*ARRIVE EARLY TO ENSURE ENTRY*
*Limited Tickets Available…this event will sell out*
On this night DAVID GUETTA returns to GLOW! Limited tickets will be sold to ensure your comfort. Music and Visuals from the main room will also be broadcast throughout the venue!
-------------------------------------------------
As one of the most in demand producers on the planet, David Guetta is poised to take electronic music out of the confines of the global underground, where he reigns as the No. 1 House DJ. Joining hands and forces with some of the biggest names on the urban scene, while introducing some undiscovered talents, another level beckons.
Already a multi-platinum selling artist in Europe, with three chart-topping albums to his name to date (Just a Little More Love 2002; Guetta Blaster, 2004; Pop Life, 2007), his signature sound of quirky, electro, house and dirty pop, is igniting across the rest of the world, where it was kept a club-land secret. Until now.
EMI Music released Guetta’s much-awaited 4th album late August. It features guest vocals from Kelly Rowland, Will.I.Am, Novel and long time hit-maker Chris Willis, of course. Plus there are others too hot to mention yet. Guetta has also produced the forthcoming single by the Black Eyed Peas “I Got A Feeling”.
His mission is to share the love and connection Dance music is built on while bringing together music scenes that co-exist but don’t often mix – like NERD, Timbaland and Kanye - but significantly, from another perspective. Call it Electro-Hop, R&B Dance, Hip House, whatever you want, but it's the sound that will define 2009 - 2010.
As an artist and producer, he makes music that rocks the coolest clubs and yet sits proudly on pop radio and MTV. He uniquely and boldly treads a tightrope most DJs wouldn’t dare to traverse too: the line between being an underground DJ and having huge crossover success.
That might not sound like two worlds that go together, but that he won a World Music Award and was voted the best house DJ in the DJmag Top 100 in the same year is a credit to his ability to work in both of these seemingly disparate worlds.
David knows what touches people; playing in over 200 cities last year alone and up to 2 million people at a time - as well as in underground basement jams; he should.
“I’m not trying to be credible,” David admits with a smile broadening across his soft, open face. “I’m trying to be incredible. It’s very easy to be underground because you just have to obey a set of codes. It’s very formulaic. But it’s also very easy to be totally pop, because it’s very formulaic too. I’m trying to do something different.”
With around 70 million hits on YouTube (and climbing fast), David is as popular outside of nightclubs as he is in them. In fact, David’s video’s hold the Number 1 and No 3 spots in the most watched Electronica clips on Youtube – worldwide and of all time!
To see Guetta wind a room into frenzy is something special. Technically David is one of the most impressive DJs in the house scene. Almost remixing records live, he makes loops, slams tracks together that you’d never think would go and uses vocals over other instrumentals. His sets are so dynamic that at times it’s difficult to see how he can keep the energy up. To put it simply, Guetta creates moments.
“Everything I’m trying to do – in my DJing, my production – is about sharing emotion. When I’m making music in the studio that’s all I’m looking for. It’s what matters the most.!”