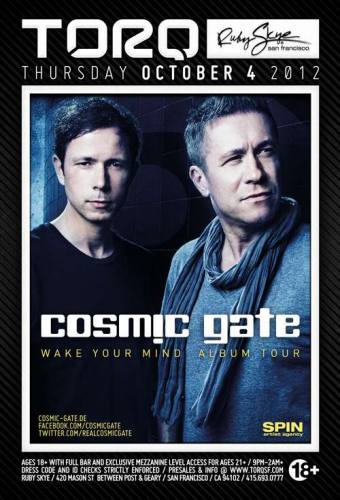 4 artist albums, 28 singles and 46 remixes, 4 Back 2 Back mix-compilations, a 1000 international gigs played and clubbers, numbered in their millions, thrilled ... all from one chance meeting in a record label office. Nic and Bossi's Cosmic Gate's partnership has proved to be one of electronic dance music's most successful, and one of its most enduring. Creating a perfect in-studio/behind-the-decks storm, 10 years into their career they became the highest-climbers on DJ Mag's 2009 Top 100 chart and landed back amongst the 25 biggest DJs in the world the following year. Powered by their hugely received albums, club-rocking singles (inc. 'Not Enough Time', 'Body of Conflict', 'Analog Feel' and 'F.A.V.') and scene-defining classics 'Fire Wire' and 'Exploration of Space' their space in EDM's hall of fame has been secured.

Over their production lifetime, the Cosmic Gate remix has become almost as illustrious as their productions. In essence a blow-by-blow of trance music's A-list, Nic and Bossi have lent their studio know-how to productions from Armin van Buuren, Tiësto, Paul van Dyk, Above & Beyond's OceanLab project, Markus Schulz, Deadmau5, Robbie Rivera & Rank 1. They rewired John O'Callaghan's mega-seller 'Find Yourself' to devastating effect and produced remixes of veteran trance producer Vincent De Moor's 'Fly Away' and 'Carte Blanche' (Veracocha). In early 2010 Atlantic Records US approached them to remix James Horner's 'I See You' - the main theme from the film Avatar. This run culminated in them being nominated for Best Remixer at the 2010 IDMAs. Most recently they have reworked Ferry Corsten's classic 'Punk'.