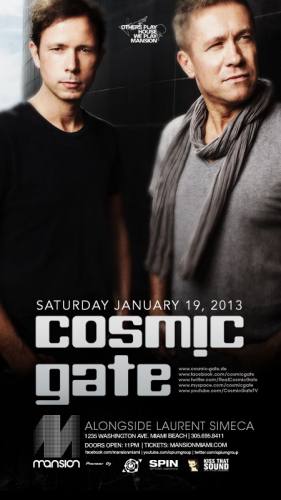 4 artist albums, 28 singles and 46 remixes, 4 Back 2 Back mix-compilations, 1000 international gigs played and clubbers numbered in the millions, thrilled… all from one chance meeting in a record label office. Nic and Bossi’s Cosmic Gate’s partnership has proved to be one of electronic dance music’s most successful, and one of its most enduring. Creating a perfect in-studio/behind-the-decks storm, 10 years into their career they became the highest-climbers on DJ Mag’s 2009 Top 100 chart and landed back among the 25 biggest DJs in the world the following year. Powered by their hugely received albums, club-rocking singles and scene-defining classics ‘Fire Wire’ and ‘Exploration of Space’ their space in EDM’s hall of fame has been secured. Join us as Others Play House, We Play Mansion presents Cosmic Gate at Mansion.