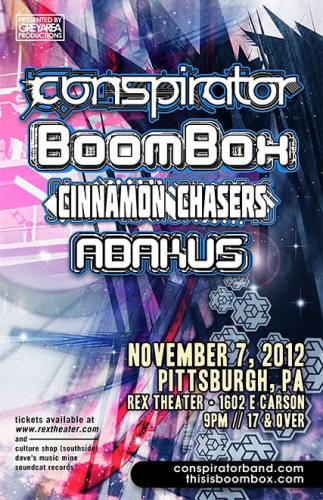 2011 has been a seminal year for Conspirator. Formed in 2004 by Aron Magner and Marc Brownstein (The Disco Biscuits' keyboardist and bass player) along with New York producer DJ Omen, Conspirator has taken on many forms through the years. With the recent addition of virtuoso guitarist Chris Michetti and stalwart drummers Darren Shearer (the New Deal) and Mike Greenfield (Lotus), Conspirator has reached a new level.

As a full band, the music is hitting new highs, and with the addition of an arsenal of new material, crowds across the nation have begun to catch on. Conspirator can no longer be considered merely a side-project, but must be looked at entirely as its own entity.

Coming off of break-out performances at Ultra Music Festival and Nocturnal Festival, Conspirator has begun to catch the eye of electronic music aficionados everywhere. Refusing to be pigeon-holed into one genre, they explore the many realms of electronic music, effortlessly slipping between house, dub-step, drum and bass, and electro. Check out Conspirator at one of the many festivals they are appearing at this Summer: Electric Forest, Camp Bisco, Liberate Festival, Catskill Chill, and more.

BoomBox consists of two versatile producers, DJs, songwriters, multi-instrumentalists and longtime friends Russ Randolph and Zion Rock Godchaux. Together they develop an electronic blend of vintage Rock and Blues made to move dance floors while incorporating their signature Backbeat, Psychedelia and Funky House sounds. Applying a multi-track platform, they are free to create their hybrid style on the fly with a rhythm that moves fans and opens them up to Godchaux and Randolph's overall vision. Derived from the rich musical history of Muscle Shoals, AL, to the psychedelic rock and underground electronic scenes of the west coast, their unique approach can only be achieved by the blending of sound and culture.

BoomBox's first release, Visions of Backbeat, contained the breakout song "Stereo" that built the foundation for their rapidly growing fan base. After years of steady touring and honing their sound, they released their sophomore effort, downriverelectric, and was hailed by critics as a progressive follow up effort. BoomBox are continuously working on new releases, using a blend of programming and live instrumentation with both members on drums, Randolph on keys, and Godchaux on guitar, bass and vocals.

Each live show is unique to the venue and the crowd, who are the driving force of the rhythmic BoomBox experience. "It's all natural, it's all in real time, and that's why it's Rock 'n' Roll", says Godchaux. Traditional set lists are never created prior to shows, instead, BoomBox chooses the music based on the atmosphere, to create a one-of-a-kind experience for fans. Randolph adds, "We just want to go out with no game plan. That way it's fresh for us, and we can follow the energy of the crowd. We're down to get down, and we hope that people are down with us."