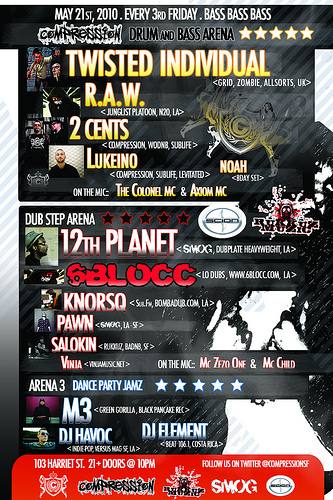 Every show COMPRESSION & RUKKUZ have done this year has been Outta Control ..... and no matter what the vibe and support from people is always positive... and AWESOME.....It is definetly what fuels the Diverse..Bass Heavy....Epic lineups every show which are always SO F@CKING FUN!!!!!!
COMPRESSION is on point with the DnB every month and this month is no different.....
TWISTED INDIVIDUAL
Always armed with a bag of fresh dubs to unleash on the crowds, THE ONE CALLED TWISTED is ready to DEVISTATE THE DANCE FLOOR with his wikkid ORIGINAL DnB tunes that are definite facemelters.
ONE OF THE BADDEST RUDE BOYS in dnb history, Twisted Individual broke onto the scene with huge releases on FORMATION RECORDS back in the early 2000's. As with any popular style of music, when something is successful, the masses will follow, and soon the Twisted clones started to fill the shelves of all the record shops. Not a man known for his restraint, in 2003 Twisted cooked up a message to all those he felt were ripping his sound. Bandwagon Blues exploded onto the scene and instantly became an anthem with rewind after rewind ensuring this was a front runner in every DJs set. Off the back of his previous success and other tracks such as Rusty Sherrif's Badge, Heavy Metal, and Hand Grenade Twisted found himself up for 3 categories at the 2003 Accelerated Culture Awards, walking away with awards not only for BEST TUNE for Bandwagon Blues, but also BEST PRODUCER.
Since then Twisted has not stopped. Recent tracks such as 'Swan Cake', 'Konga remix' have kept him at the top. This will be his first time back in SF in ages and COMPRESSION CREW can not wait to have him rocking the decks again so we can brock out with our dance floor crew.
R.A.W
Also joining for the occasion, and giving SF that sound we crave, is non other than the legendary R. A. W. !!! With over 35 domestic vinyl releases and over 15 years in the game he is still one of the most sought after and influential DJ's in the U.S. and across the world.
COMPRESSION rockers 2 CENTS (aka DJ Aye~N & DJ Mal) & LUKEINO are also gracing the decks along with one of our favorite local talents, DJ NOAH. HARD HITTING SUB LOW coming straight from some of the most dedicated and gifted local heavy weights who never disappoint.
Did we mention that we will also have the mighty...
Colonel & Axiom MC pon da mic?!?!
Trust this... You are in for a EPIC night of partying to say the very least!
___________________________________________________________
WEST COAST RUKKUZ inna the DUBSTEP ARENA
featuring the PUNISHING BASS of...
12th PLANET
There is so much I could say about our boy 12th Planet to try and illustrate the impact he made during WMC this year. If blowing the doors off of SXSW the week before wasn’t good enough. This trailblazing dubstep king had the whole electronic music scene buzzing his name around the city of Miami. After his massive set at DJ Craze and Shy FX’s party, BANG! BANG! He kicked it with P. Diddy and its not hard to see why he is KILLLING it at every show he plays its never a doubt that he is WEST COAST DUBSTEP....and Internationally known!! Thanks to 12th Planet and the events he aligns himself with; Smog, Media Contender, HARD, and his own club night Dubtroit LA is definitly one of the largest dubstep scenes in the US. Like the mythological twelfth planet (popularized by controversial author Zecharia Sitchin), our 12th Planet flies perpendicular to the system. His wicked beats are off axis. His subsonic frequencies surround you in their own orbit. America's first king of dubstep is ready for impact.
And showing the dubsteppers he can Rock any GENRE and KILL IT EVERY TIME .
6BLOCC
Will be playing so much bass this night its CRAZY!!! The word on the streets is 6BLOCC is looking to put out some white labels of his hottest dubplates that always get the call...PUULLLL UUUPPPPP!!!! If you're wondering what the name 6BLOCC means? "I got the name from a Masta Ace song here he says, "the bass I create is heard from six blocks". BOOM !! You ready for this West Coast LEGEND to BLOW THIS SHIT UP!!!
KNORSQ
HAHAHA FOR REAL we went there .... Gracing the decks once again for RUKKUZ this year after SERIOUSLY owning the dance floor in January with his Hip Hop inspired Dubstep Tunes...... Knorsq had to join his boys in this WEST COAST BASS ASSAULT!!!!!
PAWN
SMOG resident and SF local the man which WU TANG needed to have on their dubstep release.....BASSFACE is always present when Pawn is on the decks.
Just when u think u cant handle much more we bring u RUKKUZ's own :
SALOKIN
He is hands down the BASS KING OF/ HIP HOP DUB / SCRATCHING crazyiness and will end the night like only he can do.
VINJA
Opening the night with tracks so FIERCE that antiserum plays his tunes in every set he play!!!!!!!
Mc Child // ZezOone // Subverse will be hosting the night ...... are u ready SF?!?!?!?!?!?!?!
About | Advertise | Contact | FAQs | Terms of Use | Privacy Policy | Accessibility Policy © 2022 - TheUntz.com. All rights reserved.