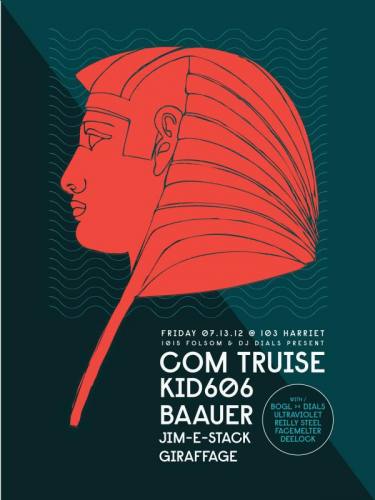 Com Truise is one of the many personas of producer and designer Seth Haley, born and raised in upstate New York and operating out of a 12’-overrun apartment in Princeton, New Jersey. An admitted synth obsessive, Com Truise is the maker of an experimental and bottom heavy style he calls “mid-fi synth-wave, slow-motion funk”.

Haley’s been making music on the side for roughly a decade—going through pseudonyms like toothbrushes (Sarin Sunday, systm, Airliner)—first as a DJ, and currently, as an excavator of softer, window-fogging synth-wave.

KID606 is dedicated to bringing his uniquely reckless fucked up and beautiful music to our fucked up and beautiful world. Insipired by the best of electronica, punk, jungle, hiphop, bass, dancehall and techno, Kid606 Fuses it all together with a love of pop culture that Andy Warhol would approve of. Apart from running the labels Tigerbeat6, Shockout, and Tigerbass, Kid606 has performed all around the world many times over, and released records on highly regarded labels such as Ipecac, Wichita, Mille Plateaux, Fatcat, Souljazz, and Carpark. His highly original productions helped spearhead and define the edgy and confrontational glitch and mashup styles that are now common in modern music production. His album "Down with the scene" (2000) was a landmark release for the burgeoning international electronic music scene, with everything from hardcore ragga jungle and serene ambient to abstract IDM and the dubby soul classic "Secrets 4 Sale" with Mike Patton. Things only got more exciting as Kid606 delved deep into the seedy overworld of mainstream music with critically acclaimed unofficial remixes that many people wanted to hear yet no one else was willing to make. All the while releasing his own original and diverse productions as well as official remixes for Amon Tobin, the Rapture, the Locust, Foetus, Depeche Mode, The Bug, Peaches, Dälek, Ellen Allien, Saul Williams, Super Furry Animals, and countless others. Open your ears and shout along, or close your eyes and dance but always expect the unexpected.

Hip Hop born from the internet