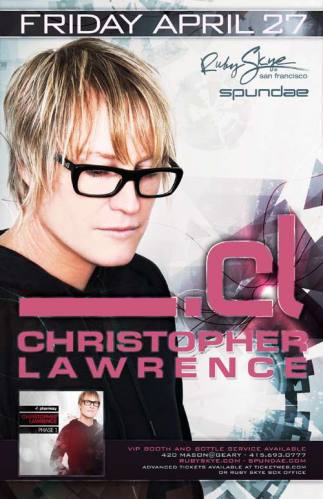 Voted the #4 DJ in the World by DJ Magazines prestigious Top 100 poll for 2006, Christopher Lawrence is recognized worldwide as one of the World’s top DJs and producers. Dubbed “A Superstar DJ” by the USs URB and One Of The Most Popular DJs On The Global Circuit by DJ Magazine, Christopher Lawrence is one of the biggest, most respected and popular names in dance music today. Once an outsider in a world dominated by European and UK DJs, Christopher has risen to the top of the international dance music heap. He is now considered one of the key global players and Americas leading dance music export, playing his tough techno trance sets main stage at the worlds biggest festivals and superclubs.

Meanwhile, back in the US, Christopher continues to be one of the countries most sought after DJs, headlining high profile events from San Franciscos Love Fest and Sonys Playstation 2 Tour to Arnold Schwazzenegers Terminator III party. He has played the famed Coachella festival more than any other DJ, and was also the only US DJ invited to headline all three of the inaugural Ministry Of Sound, Cream and Gatecrasher tours of America.