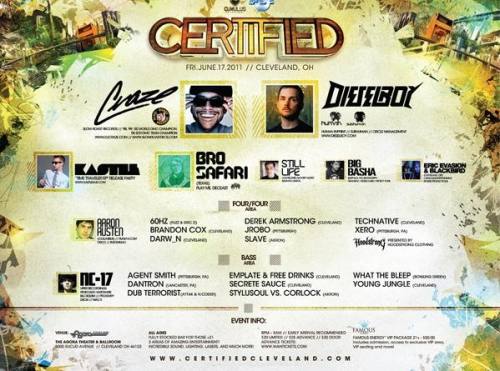 
Craze's life is a legacy of rags to riches, geek to chic, no-name to world fame. He never had it easy from fleeing battle in Nicaragua at the age of 3 to a geeky adolescence to Hurricane Andrew hitting Miami in 1992 nor did have ever have any coattails to ride; his is a story that's an uphill battle, but a story that ends right at the top. "My mom always taught me I could do anything I put my mind to. So when she asked what I wanted to do with my turntables, I told her, 'Be the best DJ in the world,'" Craze casually laughs. And that he proved 3 times at the DMC World Championships, an unprecedented record, and a title that no other solo DJ has yet to match. While Craze is regarded internationally and unquestionably as one of the best scratch DJs in the world, it's still astonishing to see his overwhelming number of titles on paper: Craze has won first place for the USA DMC Championships in 1998, World ITF Scratch Off Championships in 1998, ITF Western Hemisphere Scratch Off Championships (1998, '99), Winter Music Conference Scratch Off Champion (1996, '97, '98, '99), East Coast DMC Championships (1997), East Coast Rap Sheet Championships (1996) and Zulu National Championships (1995, '96), to name but a few. Additionally, DJ Craze claimed 2nd place in the first DMC Team Championship with his Allies' crew (which included fellow champions A-Trak and Infamous) in 1999 and then in 2000, the Allies' won the Team Championship title, taking it from the previous year's winners the Scratch Perverts.


On top of his untouchable turntablist skills and scratch champion showmanship, the world has also recognised that Craze is a second to none club DJ he has toured the globe over, from Jamaica to Australia to Japan to Iceland to France to the country he was born, Nicaragua. All DJing aside, Craze is also a world- renowned producer, releasing wildly successful drum'n'bass records with labels such as Cartel Recordings, Breakbeat Kaos, and C.I.A and other hip hop inspired productions with the likes of DMC Records, Ninja Tune Records, OM Records and K7 Records. It's the respect from both DJs and audiences alike that has paved Craze's seamless move between hip hop and turntablism to drum'n'bass both serious subzero clique/cult scenes the globe over demanding much of any artist trying to peddle their wares worldwide; to what now sounds like club-style Miami bass, formed with the technical love of hip hop with clean cuts and ridiculously dextrous scratching, but a mix up of straight up rap, ghettotech, raw booty house, old-school electro, Baltimore/Miami bass crossover and sweaty lo-end dancefloor music, making it all but impossible to keep still. This is Craze the man who arguably defined his hometown Miami turntablism scene, only to return now to reinvent this take on the Miami sound; a neo-genre of his own special blend of every which way club codes from the ghosts of discos past, present and future.


"I won the DMC's when I was 20. I joined the Regionals, won that, Nationals, won that, and then won the Worlds. And I took it from A-Trak that's right! But he was only like 15 when I beat him. I was still scared. Then in that year, in '98 when I beat A-Trak in the [DMC] Worlds, I didn't wanna battle no more and I thought he'd be the icing on the cake, so instead we formed the Allies and we kicked everybody's butt. (laughs) Except the [Scratch] Perverts, they beat us once in the US, but then we came over here to London and we kicked their butt. So hey, payback's a bitch, Tony!"


The best known face and sound in American drum and bass for over a decade belongs to Brooklyn-based Dieselboy, aka Damian Higgins. Now an international icon in this underground dance music movement, Dieselboy is the most in-demand American d&b DJ on the global club, festival and rave circuits on six continents. Since the early ‘90s Dieselboy has pioneered drum and bass in North America. His prized mixes have been the gateway for countless loyal fans to the high energy, futuristic, science fiction vibe of d&b.


Dieselboy has an intense week in / week out touring schedule and has played most of the major festivals including Coachella, Bonnaroo, Electric Daisy Carnival, Nocturnal Wonderland, Ultra, Love Parade, Starscape, Shambhala, Movement, Virgin Festival, Creamfields (UK), Jisan (Seoul), Phat (NZ), Pirate Station (Russia), and on and on. His original music has been featured on MTV and ESPN as well as video games, commercials, etc. He has also been featured on the cover and inside of many magazines including URB, Billboard, DJ, DJ Times, and Mixmag.


Dieselboy currently runs two record labels including the celebrated US drum and bass imprint Human and the recent dubstep and electro up and comer SubHuman. On top of all of this Dieselboy has also conceptualized and initiated the longest running tour in electronic music, Planet of the Drums, and the recent metal-themed multimedia extravaganza Monsters Of Jungle.


The popularity of bass-heavy dance music is spreading like wildfire across the world, with many producers crafting their own styles of dubstep, grime and garage. In the humble city of Pittsburgh, PA DJ/producer Kastle has cultivated his own style of bass-heavy beats with a soulful twist reminiscent of classic Chicago house.


After teaching himself guitar and piano around the age of 12, Barrett Richards pooled his efforts towards electronic instrumentation about two years later. He began taking production as seriously as he did DJing during that time, and involved himself deep into the Northeast rave scene. It was no surprise that in time, though, personal growth and 14 years of production experience paired with a degree in audio engineering would breed a new sound. Kastle came to life at a pivotal moment after a big move from Boston back to his hometown of Pittsburgh in March 2009. After nearly a year of conceptualizing, he knew he was working on something special.


The name itself implies a fortress, a personal space that is used tocultivate a long-time love of hip-hop and R&B, old garage and 2-step and fuse it with the magnetizing effect that dubstep, garage and bass-heavy music has had on Barrett and, really, the various communities of underground electronic music. Readjusting to Steel City - a concentrated environment of blue collars and strong values - he wasted zero effort to get the project off the ground.


The studio and touring dichotomy of an artist's life is a perfect yin & yang for Kastle in both his production and outlook. His professional experience as an engineer puts forth clean, crisp production, but his love for the party provides a playful bass that eats a room. Altogether, the wide varieties of vocals - both originals and sampled - are a key element to Kastle's sound. "I grew up on hip hop and R&B, and sampling is considered an art form," he says. "It's becoming more and more fun to dig through old records and find obscure samples." He cites another unexpected influence - legendary French filmmaker Jean-Luc Godard, who had once said that "it's not where you take things from, it's where you take them to."


Straight out of the gates Kastle has garnished strong media attention from the likes of XLR8R, URB and Fact Magazine along with plays on BBC Radio 1.His fresh and unique production work has also seen him working with big labels such as Ministry of Sound and Scion A/V and he has lent his production chops to rework artists such as Example, Blu Mar Ten and The Glitch Mob. With so much accomplished in such a short time, it is clear that not even the sky is the limit for the future of Kastle.  THIS IS EXCLUSIVE!


*HE'S BACK AGAIN TO ANNIHILATE THE DANCE FLOOR! *


Bro Safari is the alter-ego of DJ and producer Knick, a name that's already well-known for his work as 1/3 of the leading Drum & Bass group Evol Intent, as well as being 1/2 of the popular mash-up project Ludachrist. Bro Safari's production work spans the entire spectrum of Dubstep and 140bpm bass culture while his live shows have been gaining a reputation as being rowdy, unpredictable and incredibly hard edged. He recently broke into Beatport's Top 10 charts with his tune "Reckless" (feat. Sluggo) on Play Me Records and his forthcoming material is getting wide support from people like Excision, 12th Planet, MRK1, Reid Speed, J. Rabbit and many more. His reputation for destroying dance floors has earned him a steady flow of gigs and with new tunes in the pipeline and new live sets being formulated, 2011 promises to be a big year for the Bro.  CLEVELAND ARE YOU READY FOR ANOTHER EPIC PERFORMANCE!


WHAT THE BLEEP (Bowling Green)


FULLY STOCKED BAR FOR THOSE +21 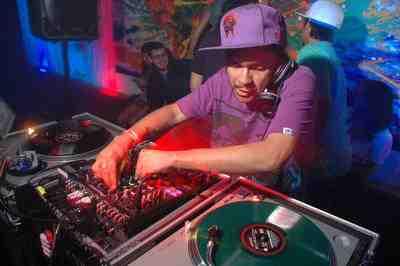