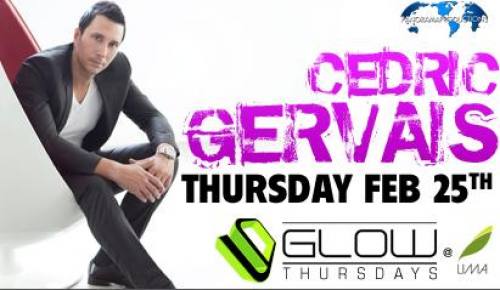 CEDRIC GERVAIS
Opening set
ROBERTO GONZALEZ
(GLOW-DC)
Cedric Gervais:It is an uncommon occurrence in the Electronic Dance Music scene to find an artist sensationally talented as both a DJ and a producer. Cedric Gervais is of the rare breed whose talents behind the decks translate over into the production room. For years he has captivated clubbers and partygoers as he reigned supreme over the Miami dance scene. Although originally born in Marseilles, Cedric Gervais has chosen Miami as his adopted home, and the city has been more than happy to embrace him. He has held residencies at Crobar (now Cameo) and the world famous Nikki Beach, before taking over the Space Terrace. Cedric’s presence at the Space Terrace was felt immediately as people in the thousands began lining up to witness him devastate the after-hours scene. Despite being in such heavy demand, Cedric still found time to take his talents into the studio. His first single with Ultra Records, “Burning” was a great success on both the charts and the underground circuit. Soon after, he unleashed his debut album “The Experiment”, which featured the massive hit, “Spirit in My Life”. The album took him to a different level as he spent the next couple of years touring the world, entertaining and thrilling his many fans. His production credits include working with the likes of Lenny Kravitz, Deep Dish, Steve Lawler, and Rachel Star, just to name a few. Whilst maintaining a hectic tour schedule, Cedric has managed to both continue his residency at Space and spend plenty of time in the production room. His latest single, “Mauri’s Dream”, was Pete Tong’s Essential Tune of the Week three weeks in a row, and has received great critical acclaim from both DJs and producers. Many consider it to be one of the best, if not the best song revealed at the 2009 Winter Music Conference. It will be hard for any producer to top “Mauri’s Dream”, but tantalizingly enough, Cedric has expressed that “Mauri’s Dream” is just the beginning of what should be a string of smash hit releases. Currently, Cedric is working on his highly anticipated second album, “Miamication”; which is scheduled for release later this summer. He is working closely with Sharam (of Deep Dish fame) and the duo already had a monster record together, entitled, “U Don’t Even Know Us”, under the moniker, Sharvais. Cedric has also just relaunched his two record labels, Sleaze Records and SleazeTech. Having undergone major makeovers, the two labels are ready to take the Electronic Dance Music world by storm. Sleaze Records will specialize in house music and SleazeTech will focus on Techno and Minimal. Both labels are set to begin a heavy release schedule with the first set of releases coming in the end of April. With a host of new talent signed to the two labels, it is only a matter of time before Cedric propels them both to the top. Very few have managed to enjoy the kind of success Cedric Gervais has worked hard to achieve in such a short span of time. The scary, yet enthralling aspect about Cedric’s career is that it has yet to reach it peak. Although it would be cliché to say the future is bright for this young star, it is nevertheless true. No one can be sure what is in store for Cedric, but what can be certain is his impact will be one that will be felt for generations to come.
Featuring
-State of the art sound, lighting and visuals
-Outdoor Patio (smoking allowed)
Glow Thursdays at Lima – Ages 21+
1401 K St. NW Washington D.C.
Tickets & Info: www.clubglow.com Direct: 202.271.1171 Tables: 202.789.2800
Facebook: Glow Fan Page & “I Love Glow” Group // Myspace.com/clubglowdc
Twitter – ClubGlow // Blog: www.dcclubbing/blog
BECOME A “FAN OF GLOW” ON FACEBOOK AND GET THE BEST DISCOUNTS TO ALL GLOW EVENTS!!!