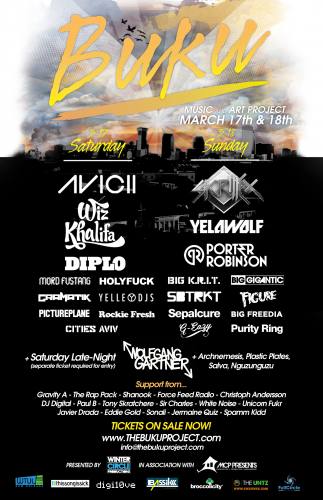 Winter Circle Productions, in association with MCP Presents, has just announced a new music event for New Orleans -- The BUKU Music + Art Project on March 17-18, 2012 at Mardi Gras World in the Warehouse District of New Orleans right on the Mississippi River. Headliners for the weekend are the Grammy-nominated artists Skrillex, Avicii, and Wiz Khalifa. The initial artist lineup is below, with more details, pre-parties and late-nights, and more artists to be announced after the New Year:

Tickets go on sale at www.thebukuproject.com at noon CST on Thursday, December 29, 2011.