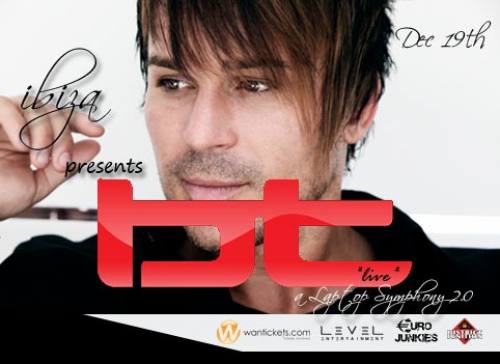 BT, born Brian Transeau, grew up outside Washington D.C. where the first evidence of his musical talent manifested as mastery of composers such as Chopin and Bach by age six. A great break in musical direction came when he heard electronic music as an adolescent. “This is what my heroes Debussy, Stravinsky and the like were looking for. Technology-based music is the only idiom that packs such infinite sonic possibilities. He dropped out of the prestigious Berklee College of Music in Boston in 1990 to shop his electronic music in Los Angeles. Many doors were slammed in his face because few understood his new unique sound, but he refused to compromise his vision. He returned to the D.C. area and launched Deep Dish Records with long-time high school friends, and recent Grammy award winners, Deep Dish. Within the year, BT’s fi rst releases garnished the attention of English dance pioneer, Sasha, who gave BT his first taste of stardom and the rewards of dance culture.
In recent years he has gained additional fame for producing several Hollywood film scores and the 2001 NSync hit "Pop". In February 2009 BT began to use Twitter to update his fans on the progress of his new album. BT has described the album as "very focused, glitchy beats, lots for a dancefloor, amazing mixes and great guitars." He has also stated that his long awaited software releases will be released along with this new album as a limited edition box set containing remix material for all of the new songs. On October 1st, 2009, BT made known that this new album would contain 12 original tracks via a crypogram posted on his tumbler page. Performing live with keyboards, vocals and composing software, this will be his homecoming night as we welcome BT on the superb main room sound system bringing us his new show “Laptop Symphony 2.0”.