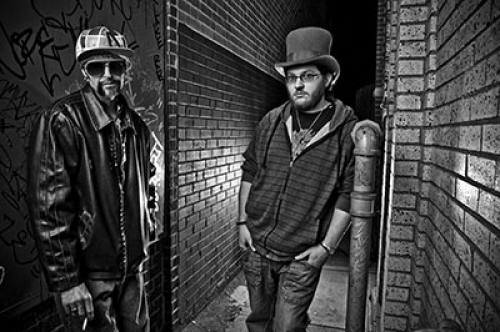 BoomBox evolved through the common visualization of a pair of forward thinking artists from diverse musical backgrounds. Raised by supportive and musically inclined parents, both Godchaux and Randolph had an obsession with music at very young ages. Godchaux, who grew up with deeply embedded rock and roll roots, began playing drums at the age of two, and played guitar and wrote his own songs as a teen. During the 90s, Godchaux was a well-received touring DJ based out of the San Francisco area. Randolph began as a young drummer, but it's what was happening behind the scenes that attracted him most. As much producers as they are musicians, it is Randolph's understanding of soundscape and Godchaux's knack for songwriting that keeps BoomBox resonating at higher levels.

Randolph, previously known for his production credits (Rex Foundation, Saliva, Sugarland, Los Lobos, Chuck Berry) crossed paths with Godchaux, while they were recording the Heart of Gold Band album, "At The Table," with Godchaux's mother, Donna Jean, formerly of the Grateful Dead. Godchaux had a heavy hand in creating the album through writing and singing as well as playing multiple instruments, while Randolph guided and engineered the album's development. The rest, they say, is history, and together, Randolph and Godchaux's talents tear apart previous notions of music and sound as experienced through their debut album "Visions of Backbeat."

Eliot Lipp didn't choose to become one of the most looked to artists in contemporary electronic music, but somehow, Lipp's sound, one that uses vintage gear to create a unique take on Hip Hop and House, has quickly garnered the respect among the industry's most influential musicians and producers as well as the deep admiration among audiences worldwide.

Since being discovered by Scott Herren (aka Prefuse 73) in the mid 2000's, and releasing albums on the cutting edge labels Eastern Developments, Mush and Hefty as well as backing the hype with a relentless touring schedule of influential live shows all over the globe, Lipp has quickly become one of the barometers for the revival of electronic music in the States.

Lipp's signature sound, a crossbreed of 90's Hip Hop and House, 70's Funk fusion as well as classic Electro, has and will continue to breakdown barriers and transpose trendy scenes. Whether programming Hip Hop beats, writing dirty basslines, collaborating with the likes of premier producers, DJs, MCs and musicians, examined by SPIN, URB, Pitchfork and other media or playing popping parties at clubs and festivals worldwide, Eliot Lipp will continue to do his part in revolutionizing electronic music.