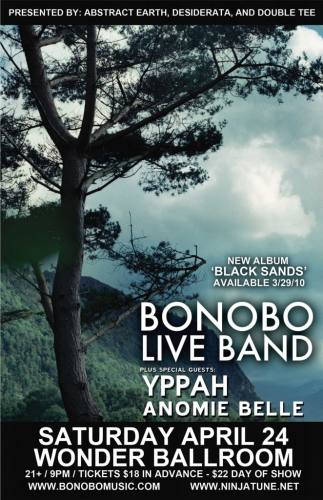 Abstract Earth, Desiderata & DoubleTee Present
Ninja Tune recording artist
Bonobo Live Band
YPPAH
Anomie Bell
21 & Over. $18.00 advance. $22.00 day of show.
Bonobo Live Band: With the experimental warmth of '60s French films and the pizzicato flavor of horizontal hip-hop, Simon Green's Bonobo project established a welcome niche of a pretension-free, post-party intellectual chill-out. An almost silent figure among Ibizian romanticists, Green began in Brighton, debuting in 1999 with a track on Tru Thoughts Recordings' When Shapes Join Together compilation. Though tempted by offers from Mute and XL after the official issue of "The Scuba EP" and the "Terrapin" single, Green stuck with Tru Thoughts for the acclaimed debut LP Animal Magic. Highlighted by downtempo dub, funk, and an equally likable use of sitars, Animal Magic was an obvious success and plans were quickly made for careful European support appearances, as well as a follow-up album, Dial "M" for Monkey, for Coldcut's Ninja Tune label. A tour to support the record followed and was documented on the 2005 EP Live Sessions.Whilst often touring solo, and performing DJ sets, in 2004 Bonobo opted to begin playing with a full band. The band plays live renditions of studio material, with a singer, keyboardist, guitarist, saxophonist, string section, Electronics, and drummer. Simon Green mainly plays bass guitar, and leads the band from the middle.
YPPAH: Yppah, a reversal of the word happy, pronounced "yippah," started out as Texas native Joe Corrales' solo electronic project before evolving into a full-fledged rock outfit. Roping in Chemical Brothers beats, '60s psychedelic, post-rock, and shoegaze, the result is an atmospheric, soothing soundscape that smoothly jumps from style to style. His ability to transcend genres is not surprising. Corrales tinkered with many different types of music in his past, starting out playing guitar and bass in several rock bands in his teens and then founding the turntablist group the Truth once he switched over to DJing. After turning to producing and releasing his poignant debut, You Are Beautiful at All Times, in 2006, he formed a live band, adding Thomas Sutherland, Nicholas Noeding, Jr., Mark Speer, and Ira Dean, among other rotating bandmembers. As a group, Yppah were well received, and they quickly picked up gigs playing at SXSW 2007 and the Starbucks Mixed Media Series. Also, as fitting as their music was for soundtracks, songs were featured in episodes of CSI and House and the Kevin Spacey movie 21. Corrales took a brief break to return to DJing before resuming work on Yppah's sophomore album, They Know What Ghost Know, released in spring of 2009.
Anomie Bell: Anomie Belle (born Toby Campbell 7 August 1980) is an American musician. Originally a classical violinist and songwriter from Portland, Anomie Belle began performing and recording her own music as a child. She has since worked as a musician and producer in Madrid, Glasgow, Amsterdam, New York, Buenos Aires, and London before moving to Seattle in 2006 to focus exclusively on Anomie Belle. Anomie Belle is also active as a film composer. As an audio programmer and musician, she is noted for her politically and socially conscious lyrics set to down-tempo electronic music, heavily layered strings, guitars, and vocal textures. Her material grapples with social issues ranging from American political apathy to suburban alienation, passive media spectatorship, social injustice, and consumerism. Haunting melodies and experimental electronic soundscapes transport listeners through the crowded nature of their modern minds and urban spaces.