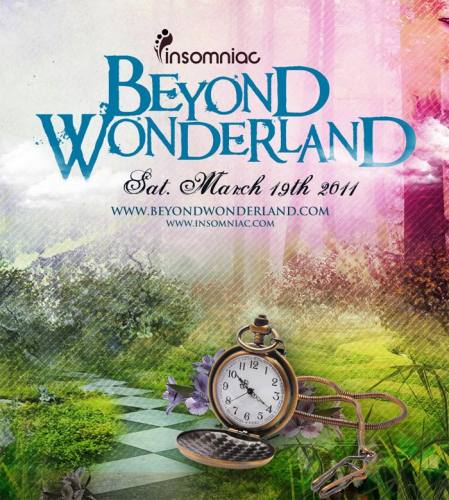 It's time to wander back down the rabbit hole! Beyond Wonderland is back to take you on another entertaining journey!

It's been years since Nocturnal Wonderland morphed naturally into Nocturnal Festival and as the Nocturnal experience has traveled deeper into the night and explored the depths of it’s forested terrain, we feel it’s time to rediscover some of the color and warmth of the original Wonderland event and reshape it into... a fresh and novel form, building on and moving further than both of its predecessors and evolving the concept in rich new directions.

Insomniac had been producing Nocturnal since 1993. We’ve thrown Nocturnal Festival for years, and prior to that Insomniac invested close to a decade of love into Nocturnal Wonderland. We now feel that it’s time to push forward, journeying past the boundaries, and see what lies on the other side of Nocturnal Festival’s darkness. We will embark on an adventure to the far side of the forest, exploring what exists beyond.

Nocturnal Festival and Beyond Wonderland have been conceived as sister festivals, nights that share a special lineage and common ancestry, and contain many of the same truths in their design. Beyond Wonderland will evolve along fresh paths, incorporating novel motifs and growing an exciting new environment that is sure to enliven, stimulate the senses and delight all of those who have been seeking a return to the amazing hues and vibrance of our original Wonderland event.

Over the years many of us have missed the wondrous aspect that the original Nocturnal captured so well and Insomniac has received a number of requests to “bring back” the old Wonderland event. Rather than resurrect the past, Insomniac will push into the future, innovating and creating a completely new concept that will indeed transport us to wonderland and far beyond.

This event is strictly 18 and older w/ID. VIP areas are strictly 21 & older w/ID